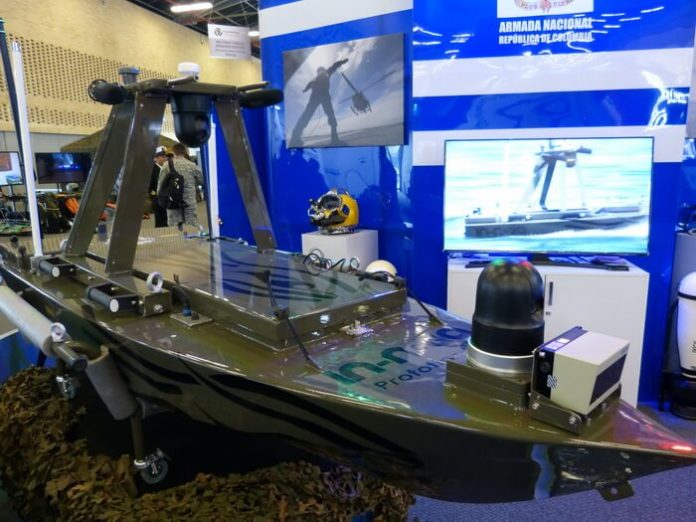 Designed in collaboration with Spain’s Technical University of Madrid, the first of two 2.1 metre/m (6.8 feet/ft) length fiberglass hulls for the as-yet-unnamed USV were built in Spain and equipped in Colombia with a sensor payload from an undisclosed Chinese manufacturer and a Light Detection And Ranging (LIDAR) system from German manufacturer SICK Sensor Intelligence for navigation.

Designed as an autonomous unmanned riverine patrol boat, the USV has a 2.6 nautical mile/nm (five kilometre/km) range and can operate up to 0.6nm (1.2km) from its Colombian-designed control station. The first prototype USV underwent a series of trials with the US Naval Academy at Annapolis, Maryland in June 2015. Driven by a water jet propulsion system powered by a commercially-available electric motor, the USV has a maximum speed of 20 knots (37 kilometres-per-hour).

There is no word as to if, and when, this USV may or may not enter service with the Colombian Navy as it is only in the proof-of-concept stage currently.

The project is part of a technologies fusion programme that will feed into the Colombian Navy’s ‘Force Planning 2030’ initiative that includes plans for new frigates to replace the existing fleet of ‘Almirante Padilla’ class vessels that are slated for retirement by 2025.

These will be built in Colombia possibly in collaboration with the Spanish shipbuilder Navantia.