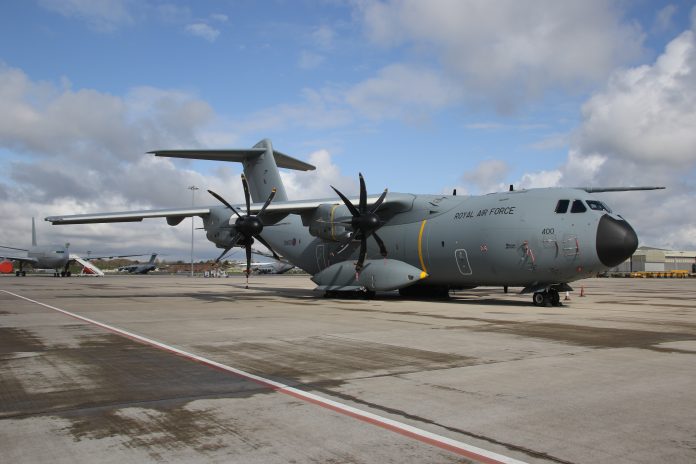 The Royal Air Force (RAF) is well on its way to clearing up the gearbox issues that have recently plagued its Airbus A400M-C1 Atlas turboprop freighters.

These gearbox problems did cause, on one occasion, one of the four Europrop TP400-D5 turboprop engines used by the aircraft to be shutdown while airborne in January 2016. The chief of staff of the RAF’s Air Mobility Force, which operates the aircraft flown by 70 Squadron, Group Captain Martin Cunningham told armadainternational.com that, while the RAF detected the issues first, the French Air Force (which also flies the A400M) were not far behind: “We know that because we share a collaborative approach with France on the A400M. The issue has been resolved, with a Truncated Pinion Propulsion Gearbox (TPPGB).”

Fernando Alonso, Airbus’ head of military aircraft, had spoken in June 2016 of the crack to the power gearbox of the A400M’s engines. He told armadainternational.com back then that the gearbox problem: “has not affected all the aircraft and only the engines which turn the propellers in a clockwise rotation.”

Discussing the engine’s gearbox issues, Gp. Capt. Cunningham continued that: “The A400M is a marvellous piece of engineering. All four engines rotate one way, but two propellers go in one direction and two the other. Those that follow the engine direction were fine; the torque in the gearbox is relatively low but the others were going through a lot of stress. It’s a feat of engineering that’s never been tried before, so problems such as this aren’t unusual … Between Avio and Rolls-Royce and all the other partners in the engine (which comprise the Europrop consortium), a fix was found within 60 days. Rolls-Royce, working with our engineers, devised an on-engine TPPGB replacement procedure, so instead of detaching the engine the work was done with it still on the aircraft. Otherwise it would have been a massive job as the gearbox is an integral part of the engine … It initially took three to four weeks to replace the problem but we’ve got that down to four days now and by February we should have 13 aircraft with modified TPPGBs.”