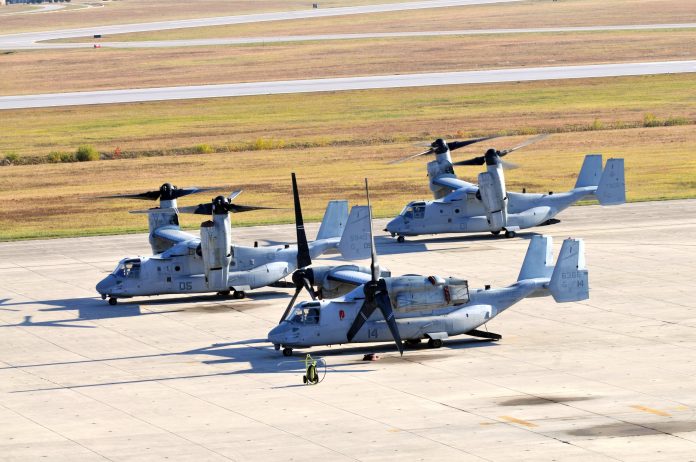 The Bell/Boeing CV/MV-22A Osprey tilt rotor aircraft is a technological marvel. It has the ability to take off and land like a helicopter, and the engines can be rotated forward 90 degrees to establish horizontal flight.

The CV/MV-22A is currently in service with the United States Marine Corps and the US Air Force (USAF). Colonel Jim Cardoso of the USAF flew the CV-22A, and he shared his personal accounts with armadainternational.com of what it is like to fly the aircraft: “The CV-22A, quite simply, flies like no other aircraft in the world. Its sheer diversity of capabilities make flexibility of employment almost limitless,” he noted: “From the ground, I pull the aircraft smoothly and effortlessly into a stable hover. Then, with some added power and slight movement of my thumb, I transition to turboprop (aircraft) speeds in under a minute … then … fly hundreds of miles for hours.”

Col. Cardoso added that the aircraft is easy to control and surprisingly manoeuvrable. It employs a dual stick and throttle allowing either the pilot or co-pilot to fly the aircraft using the same muscle memory. The cockpit displays are modern and well-positioned, and provide an array of critical information at a glance.

When “approaching the objective,” Col. Cardoso noted, “I slow the aircraft in preparation for transition to its VTOL (Vertical Take-Off and Landing) mode. In a reverse of the departure … This transition is a unique aspect of tilt rotor flying but is comfortable and well-practiced. Once completed, the CV-22 has gone from turboprop aircraft to helicopter.”