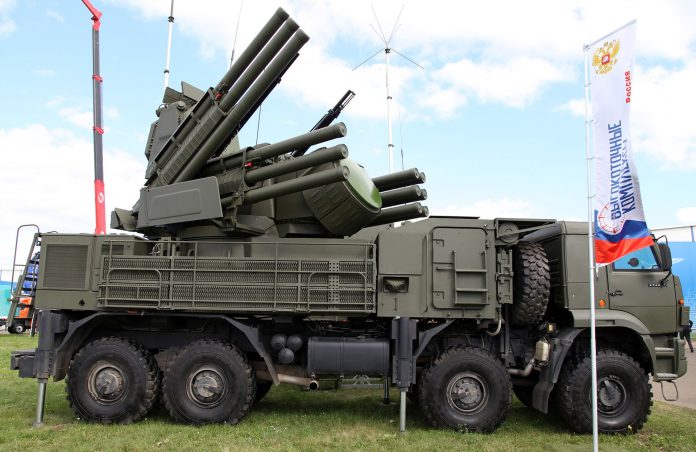 JSC Rosoboronexport (part of the Rosctec State Corporation) will organize a Russian display at the IDEX 2017 world’s largest international defense exhibition to be held in Abu Dhabi (UAE) on February 19-23, 2017.

Minister of Industry and Trade of Russia Denis Manturov will head the official Russian delegation to the exhibition, while Alexey Frolkin, Deputy Director of the Russian Federal Service for Military-Technical Cooperation, will act as his deputy. The joint Rosctec-Rosoboronexport delegation will be headed by the Rostec’s Industrial Director Sergey Abramov, Rosoboronexport’s delegation – by the company’s Deputy Director General Igor Sevastyanov.

“Russia has traditionally viewed the Middle East as one of the most important regions from the perspective of military-technical cooperation. Rosoboronexport’s offers in this market include both deliveries of cutting-edge military equipment and upgrading of the Soviet and Russian-made equipment. Russian equipment has proved its worth in the Middle East including counterterrorist operations of the past few years”, – Igor Sevastyanov said.

This year marks the 13th IDEX exhibition, with Russia having participated in all of the previous events. Rosoboronexport will present over 240 pieces of military equipment for all military services at IDEX 2017. The entire display of the Russian delegation will showcase about 800 items. Rosoboronexport’s display will feature 18 Russian defense organizations and holding companies. The Russian display is located in an indoor exhibition hall (Stands 09-С20, 09-С15, 01-В15 and 12-А25) and an outdoor exhibition area of the Military Industrial Company (CP-220) and occupies 1379 square meters.

On February 20, 2017, Russian specialists will hold a number of presentations in the conference hall of the Aloft hotel situated in the ADNEC national exhibition center. At 10:30 Rosoboronexport and Kronshtadt Group will present software and hardware solutions for the Comprehensive Approach to the Establishment and Equipping of Multiservice Combat Training Centers. At 13:30 the special exporter and Angstrem scientific-production association will hold a presentation on a new generation radiostation-based communications system.

At IDEX 2017, Rosoboronexport’s specialists have a busy agenda, which includes prescheduled meetings with governmental officials and representatives of the armed forces and business community of the United Arabic Emirates, Middle East, Africa, South-Eastern Asia and European Union.

Rosoboronexport is the only state-owned arms trade company in the Russian Federation authorized to export the full range of military and dual-purpose products, technologies and services. It is a subsidiary of the Rostec Corporation. Founded on 4 November, 2000, now Rosoboronexport is one of the leading world arms exporters to the international market. Its share in Russia’s military exports exceeds 85 percent. Rosoboronexport cooperates with more than 700 enterprises and organizations in the Russian defence industrial complex. Russia maintains military technical cooperation with more than 70 countries around the world.

Rostec State Corporation is a Russian corporation founded in 2007 to promote the development, production, and export of high-tech industrial products for civil and military purposes. It is comprised of more than 700 organizations, whereof 9 holding companies presently operate in the military-industrial complex, 6 organizations are in civilian industries, and 32 are direct control organizations. Rostec’s portfolio includes famous brands such as AVTOVAZ, KAMAZ, Kalashnikov Concern, Russian Helicopters, VSMPO-AVISMA, etc. Rostec companies are located in 60 federal subjects of the Russian Federation and supply products to the markets of over 70 countries. In 2015, Rostec’s consolidated revenues topped 1,140 billion rubles. The corporation’s average wage in 2015 was 41,000 rubles, and tax payments to budgets of all levels exceeded 160 billion rubles. According to the new Rostec strategy, the main objective of the corporation is to provide Russia with a technological advantage on highly competitive global markets. The planned investment volume for development through 2025 is 4.3 trillion rubles.