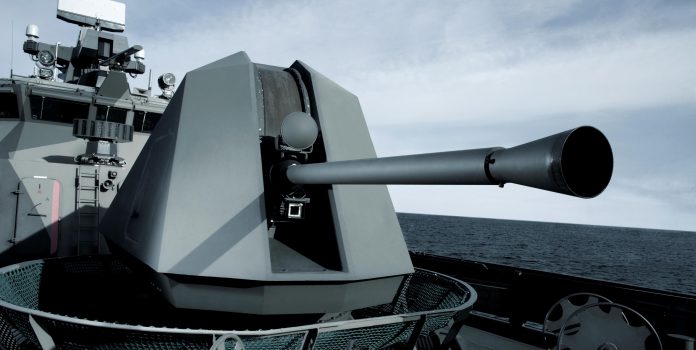 Current minor calibre autocannon naval guns were primarily aimed at engaging surface threats and, thus, can elevate to only around 40 degrees, which limited the ability to engage air targets such as Unmanned Aerial Vehicles (UAVs) threats.

To address this BAE Systems, in collaboration with Rafael Advanced Defence Systems, exhibited at the Sea Air Space exhibition held in early April in Maryland, an remote-controlled naval gun with 70 degrees of elevation and -20 degrees of depression that can fire at close-in surface and air threats.

The system can mount several different 30mm autocannon models including the Bushmaster-II or 25mm weapon. The system can be installed on craft of 25 metres (82 feet) and larger. It is full stabilised and has a dual feed from two magazines each with 100 rounds. The mount was displayed with an optronic sight. The system has been selected by the Marina de Guerra del Perú (Peruvian Navy) using the Mk.44 gun which is believed to have been installed onboard its ‘Clavero’ class patrol vessels from early in 2016.