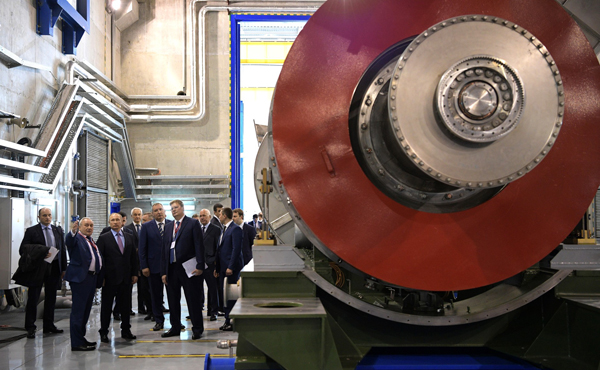 United Engine Corporation (UEC, part of state corporation Rostec) installed and activated the first assembly and testing complex of gas turbine engines and aggregates (GTE and GTA) in Russia for marine programs on the basis of Rybinsk JSC NPO Saturn. During his visit to the enterprise Vladimir Putin, President of the RF, launched the testing of GTA M35R-1 with the М70FRU-2 engine.

The development of the Russian marine gas turbine base is part of the import substitution program: although UEC possesses the competences to develop marine engines and has prototype models in the line of products in the sphere, it has not launched the serial production of power units for the RF naval forces up until now.

Apart from research and development, technical re-equipment, and process engineering, one of the key objectives of the project realization is the creation of a testing facility that would allow conducting all kinds of marine equipment testing with real-life simulations. Estimated cost of the construction of the assembly and testing complex is about 7,7 billion rubles.

The basis of the assembly and testing complex is formed by two stands: the first one reaching up to 15 MW, the second – to 40 MW. Technological solutions at designing of the object allow testing marine engines of more than 20 various configurations. It is possible to test the whole power source or its separate components (for example, a diesel & gas turbine engine consists of a diesel engine, a gas turbine engine, a marine gearbox, and the local control systems). One of the features of the unique complex is the maximal automatization of the working processes, in particular, the system of gathering measurement data.

“Rostec enterprises now possess all competences to develop marine engines and have prototype models in the line of products in the sphere. Opening the complex will allow launching the serial production and maintenance of power units for the RF naval forces by 2018,” says Sergey Chemezov, CEO of the state corporation Rostec.

At this point, the testing of M35R-1 aggregate has started at the new facility. The aggregate is designed to function as a propeller drive in the world largest hovercraft. It includes a M70FRU-2 engine, a gearbox, transmissions which connect them, and a control system. The peculiar feature of M70FRU-2 is its high efficiency and its between-repairs resource as compared to the previously used analogues. Both the aggregate and the engine are designed by the scientific production association “Saturn”.

“The realization of the import substitution program, which has influenced all of the UEC product lines to some degree, is a serious objective of our holding,” noted Alexandre Artiukhov, director general of the United Engine Corporation. “Performing a range of marine works, we have gained an important new competence in terms of performing the whole testing complex of marine engines and aggregates based on them; this competence will accommodate the needs of the RF naval forces for marine power sources.”

Research and development works are being performed as part of the creation of the Russian marine gas turbine base; they will allow moving over to the serial production of the М70FRU, М70FRU-2, М70FRU-R (“reverse”), and М90FR engines, М35R and  М70 aggregates, and the aggregates based on the perspective products with modernized gearboxes and control systems by the next year.

“We have made considerable progress in the creation of fully import-independent production of marine gas turbine units in Russia and we realize how important and responcible our work is in regard addressing government tasks,” says Viktor Polyakov, managing director of JSC NPO Saturn. “The staff of the enterprise is now assimilating the most cutting-edge technologies to be used for creating marine GTE, and works on forming a scientific and technological reserve for the development of perspective marine engines and aggregates.”

Other participants of the realization of marine programs are, together with JSC NPO Saturn, Research and Production Centre Salut JSC and STAR JSC, both of them part of UEC, as well as several other enterprises and industrial institutes, such as FSUE CIAM, Zavod Phiolent JSC, Ufa Research and Development Enterprise Molniya JSC etc.

JSC NPO Saturn is an engine plant that specializes on the development, production and after-sales maintenance of gas turbine engines for military and civil aviation, power generating and gas pumping units, and marine power units. NPO Saturn is part of the United Engines Corporation. Located in Rybinsk, Yaroslavl Region.