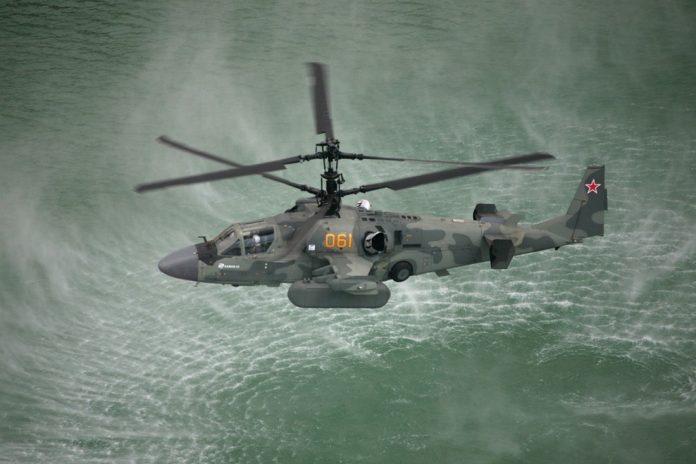 Ka-52K helicopters manufactured by Russian Helicopters holding company (part of Rostec State Corporation) completed the first phase of testing in marine conditions. The machines are currently in the premises of Kamov Design Bureau where specialists finish assessing the condition of helicopters and their components after performing tasks in harsh climatic conditions.

Two Ka-52K helicopters were tested during the period from late 2016 to early 2017. After performing the tasks set by commanders the tests of helicopters were recognized successful. The machines have already been handed over to engineers of Kamov Design Bureau for conducting additional study of the work of a helicopter and its individual units, as well as for making changes considering possible requirements.

“Ka-52K helicopters completed the first phase of testing in marine conditions, after which it can be concluded that the machines may be placed on an aircraft cruiser and successfully complete their tasks. The helicopter has unique properties; however, one test in the sea is insufficient for understanding the work of its engines, units, avionics, control and armament systems in maritime climate. The design bureau will continue its work as part of tests including those on the aircraft cruiser,” said Deputy CEO for Sales of Russian Helicopters holding Vladislav Savelyev.

The Ka-52K helicopter is another machine in the range of “maritime” helicopters developed by Kamov Design Bureau and adopted by the Russian Navy. This range also includes helicopters such as Ka-25, Ka-27, Ka-29 and Ka-31. The Ka-52K helicopter is designed for patrolling, providing fire support for airborne forces during landing, and ensuring counter-air defence on the front line and defence in depth. Modern onboard equipment will ensure navigation of a helicopter when there are no landmarks in the sea.

Russian Helicopters, (part of State Corporation Rostec), is one of the global leaders in helicopter production and the only helicopter design and production powerhouse in Russia. Russian Helicopters was founded in 2007 and is headquartered in Moscow. The company comprises five helicopter production facilities, two design bureaus, a spare parts production and repair facility, as well as an aftersale service branch responsible for maintenance and repair in Russia and all over the world. Its helicopters are popular among Russian ministries and state authorities (Ministry of Defence, Ministry of Internal Affairs, Emergency Control Ministry), operators (Gazpromavia, UTair), major Russian corporations. In 2015 its IFRS revenues increased 29.5% to RUB 220.0 billion. Deliveries reached 212 helicopters.

Rostec is a Russian corporation, created in 2007 to promote development, production and export of high-tech industrial products for civil and military purposes. It is comprised of over 700 organizations, which form 9 holding companies in the military-industrial complex and 6 in civilian industries, as well as 32 organizations under direct management. Rostec portfolio includes such well-known brands as AvtoVAZ, KAMAZ, Concern Kalashnikov, Russian Helicopters, VSMPO-AVISMA and others. Rostec organizations supply to and operate in over 70 countries. Consolidated revenues of Rostec companies in 2015 exceeded 1.14 trillion rubles (over 19 billion USD). According to the new Rostec strategy, the main objective of the corporation is to provide a technological advantage to Russia in highly competitive global markets. The planned investment volume for the development program until 2025 is over 4.3 trillion rubles (over 70 billion USD).