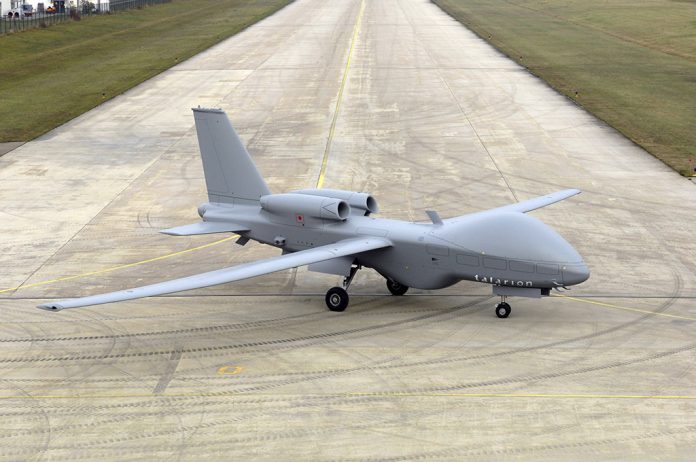 Several European nations could receive a new Medium-Altitude, Long-Endurance (MALE) Unmanned Aerial Vehicle (UAV) by the middle of next decade.

According to French, German and Italian operational requirements, the UAV would be a modular system, able to provide intelligence, surveillance and reconnaissance capabilities. A mock-up of a MALE UAV displayed by Leonardo at the June Paris Air Show illustrated that the future aircraft could perform armed missions in addition.

Different advantages might come from an EU-produced UAV. At the technical level, be ITAR-free (not subject to the US International Traffic in Arms Regulation) would allow it to flight within non-segregated airspaces – possibility currently granted in Italy only. At the political level, EU countries operating this UAV would acquire some strategic independence from the US in their aerial intelligence gathering.

France, Germany, Italy and Spain signed a 25-month definition study contract regarding the MALE UAV in August 2016. The study, which commenced in September 2016, is being performed by Airbus, Dassault and Leonardo, with the participation of the OCCAR (Organisation Conjointe de Coopération en matière d’Armement/Joint Organisation for Cooperation in Armaments) European defence procurement agency. The MALE UAV development phase is planned for 2018, with first deliveries are expected for 2025.