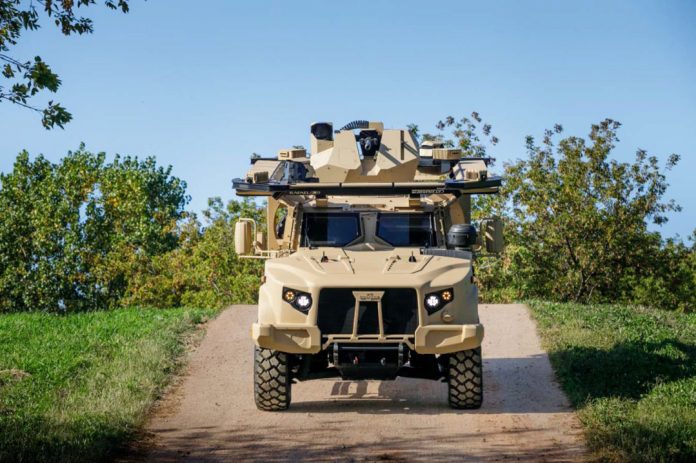 The Oshkosh JLTV is the leading vehicle program for both the US Army and Marines Corps, with growing international interest as well. The combination of Rafael’s Samson Dual with 30mm M230LF RWS and the Trophy LV solution enables the highest level of protection, hostile fire detection and greater lethality, increasing operational capabilities and allowing troops to carry out missions with a higher flexibility, maneuverability and confidence.

This integration is the second time Oshkosh and Rafael are presenting an advanced integration. In 2015, the Oshkosh Mine Resistant Ambush Protected All-Terrain Vehicle (M-ATV) was fitted with Trophy-LV APS and RCWS encompassing .50 Cal. and Spike ATGM launcher. This time Rafael’s RWS solution brings new approach towards the Army’s request for a Stabilized Remote Weapon Systems (RWS) with 30 mm M230 LF.

The operational requirement to equip armored vehicles with an APS is dictated by the growing proliferation of advanced Anti-armor weapons. Trophy-LV has the proven capability to defeat advanced threats, coupled with handling all safety considerations of an autonomous shooting system, an issue that has raised concerns among potential customers for many years.

Trophy-LV APS capabilities have benefitted from decades of experience at Rafael, developing and integrating APS’s. The principles supporting Trophy LV are similar to those of Trophy‑HV, an IDF combat fleet APS standard.

Trophy‑HV has so far saved dozens of soldiers’ lives, ever since its first deployment in August 2009 and especially in Operation “Protective Edge” (summer 2014), where numerous anti-armor threats of different kinds were launched at Merkava IV tanks equipped with Trophy. None of those potentially lethal attacks caused casualties to IDF troops. Rafael’s experience is unmatched with more than 500,000 of operational hours, making it the only mature operational APS anywhere in the world.

According to US Army officials, these capabilities have been tested extensively in 2017 by the US government, confirming previous claims.

Trophy is not merely an active protection system for tanks and other armoured vehicles. Trophy’s radars and other measures, have transformed a defensive approach into an offensive approach by detecting and engaging the attacker quickly, thereby preventing additional attacks against the force. It does so by being connected and communicating the location of the attacker to the crew itself, which can engage the attacker, or to other platforms and effectors in the formation, and those can take out the threat immediately as well. This was demonstrated on a large scale in the IDF’s Operation “Protective Edge”.

The downscaled.Trophy-LV offers a cost-effective, 360º protection, easy integration, minimal risk of collateral damage, outstanding performance at a fraction of the weight, coupled with the highest level of kill probability.

In addition to Trophy LV, the Oshkosh JLTV will be fitted with a Rafael Samson Remote Controlled Weapon Station (RWS). Samson provides military users with enhanced capability not only in survivability, but affording them greater lethality, derived from Trophy-LV’s hostile fire detection (HFD) capabilities, coupled with the world’s top-of-the-line RWS, globally integrated on thousands of fielded ground and naval platforms in over 25 countries.

The 30 mm M230LF configuration that was selected for the US army “Stabilized M230LF Remote Weapon Systems (RWS) program”, is based on a TRL9 RWS with the needed adaptations for the M230LF gun and 7.62mm coax MAG.