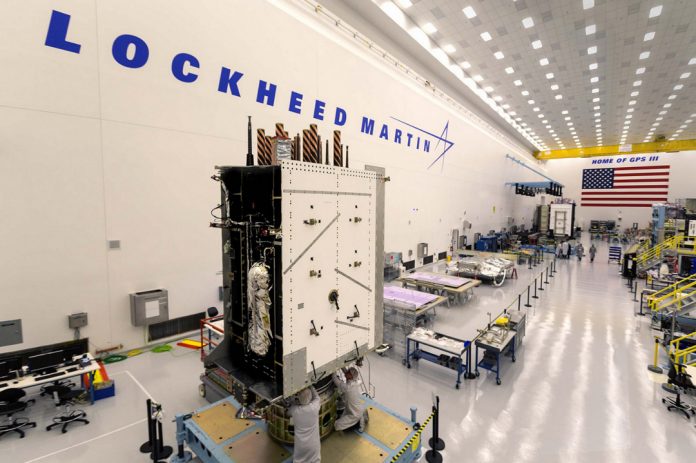 GPS III SV03 closely follows the company’s second satellite in production flow. GPS III SV02 completed integration in May, finished acoustic testing in July and moved into thermal vacuum testing in August. The second GPS III satellite is expected to be delivered to the U.S. Air Force in 2018.

All of these satellites are following Lockheed Martin’s first GPS III satellite, GPS III SV01, through production flow. In September, the Air Force accepted and declared GPS III SV01 “Available For Launch,” with launch expected in 2018.

“GPS III is the most powerful and complex GPS satellite ever designed and built, and it’s now into a smooth production flow. The real credit goes to the Air Force for all the Back to Basics work done in advance, reducing program risk for all the GPS III satellites going forward,” said Mark Stewart, Lockheed Martin’s vice president for Navigation Systems. “We are looking forward to bringing GPS III’s advanced capabilities to our warfighters in 2018.”

Lockheed Martin’s unique GPS III satellite design includes a flexible, modular architecture that allows for the insertion of new technology as it becomes available in the future or if the Air Force’s mission needs change. Satellites based off this design are already proven compatible with both the Air Force’s next generation Operational Control System (OCX) and the existing GPS constellation.

The GPS III team is led by the Global Positioning Systems Directorate at the U.S. Air Force Space and Missile Systems Center.Air Force Space Command’s 2nd Space Operations Squadron (2SOPS), based at Schriever Air Force Base, Colorado, manages and operates the GPS constellation for both civil and military users.