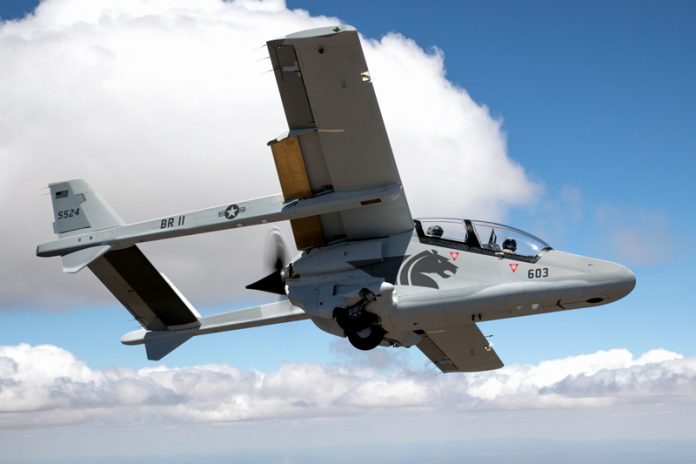 In a move set to revolutionize the light attack and tactical C4ISR aircraft industry, the launch of the BRONCO II aircraft is announced today by newly created Bronco Combat Systems (BCS) USA.

The original Bronco was renowned for its impressive mission capabilities. The BRONCO II, which is based on the AHRLAC aircraft (Advanced High-Performance Reconnaissance Light Aircraft), is a two-crew C4ISR and precision strike aircraft, capable of carrying a wide range of weapons, sensors and systems in extended airborne mission operations. It is a unique platform that is built for purpose; uses a pusher propeller and has an open system architecture allowing for the rapid incorporation of current and emerging systems, setting a new standard for mission flexibility and adaptability.

Paramount Group International Chairman Ivor Ichikowitz said, “This aircraft is a real game-changer for the warfighter. It is unique in that it has been designed specifically as a light attack and ISR platform from the onset. This is not simply an armed variant of a civilian crop-duster or a modified training aircraft. Every inch of this aircraft is designed for purpose – specifically for the kind of asymmetrical warfare that sophisticated military forces are now being asked to conduct. These missions demand rapidly deployable, hybrid ISR and close air support capabilities for which no other platform has been specifically designed.”

AHRLAC, the platform upon which the BRONCO II is based, is already in production using the latest advanced aerospace manufacturing technologies. The fact that the aircraft is 100% digitally designed makes the ability to industrialize the BRONCO II in its totality in the United States a reality. Work has started on establishing a manufacturing base that will enable the full production of the airframe and mission systems integration in the United States.

Ichikowitz went on to say “BRONCO II was designed with the US market in mind; it contains significant American content and we are now excited to be able to commit to bringing full production of the aircraft home to the USA.”

The aircraft is a purpose-built, sophisticated airborne Find/Fix/Finish/Exploit/Analyze (F3EA) system able to operate for extended periods in remote theaters with minimal infrastructure and a small logistics and maintenance footprint. The BRONCO II operates at a fraction of the procurement and lifecycle cost of an aircraft with similar mission applications and capabilities.

Fulcrum Concepts LLC will lead weapons and system integration for BRONCO II. Fulcrum Concepts Co-Owner and President of Engineering Solutions Scott Richman said, “BRONCO II is the ultimate solution to the F3EA capability, a truly multi-role aircraft with real-time C4ISR perfectly suited to the kind of light attack requirements we are seeing coming out of the U.S. military forces and a number of other programs in the U.S. market. We are excited by the opportunity to be one of the lead partners in bringing this innovative capability to the United States.”

Dr. Paul Potgieter, the CEO of the Aerospace Development Corporation which designed the aircraft, stated: “This aircraft is a completely clean-sheet, next-generation design, using the latest CATIA and digital design systems specifically for digital production. Even the factory in which this aircraft is currently being produced embraces the innovative principles of the Fourth Industrial Revolution by emphasizing the use of rapid digital prototyping, laser additive and 3D printing, and a jig-less manufacturing approach.”

Bronco Combat Systems has been established as a US based entity which will bring the aircraft to the US end user. The founding partners are Paramount Group USA, Fulcrum Concepts LLC, and ADC, who designed the AHRLAC platform. Bronco Combat Systems are actively engaging with other domestic U.S. partners to scale the entity in both capability and reach.

“This is a very exciting time for us, our partners and future US customers who will benefit from the rapid fielding of the Bronco II and its unique capabilities. Discussions are underway with highly respected and experienced US suppliers for total supply chain management, mission software, and mission training.” added Ichikowitz.