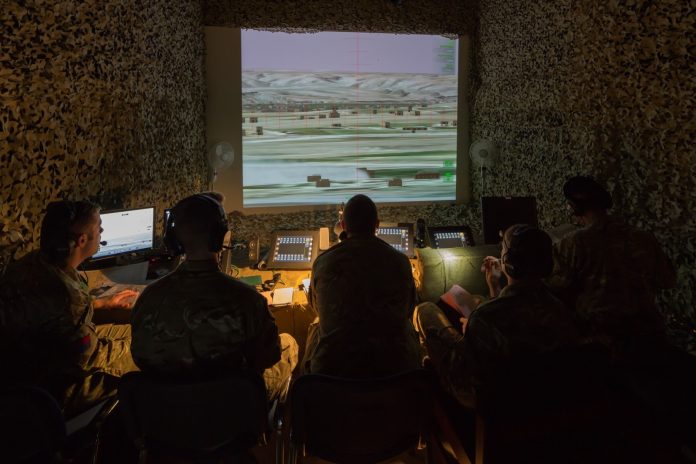 The 4-week Exercise, which delivers Joint Fires and Air-Land Integration training to the Royal Artillery, includes a 5-day exercise repeated 4 times over a month-long period. Day 1 of each iteration allows for a series of briefings and capability updates, followed by 4 days of intensive training, with the complexity of the scenarios gradually increasing across the week. Training in a synthetic environment allows the safe integration of a range of surface-launched weapon effects with fast jets, Attack Helicopters and Intelligence, Surveillance, Target Acquisition, and Reconnaissance (ISTAR) assets.

Inzpire’s experts work directly alongside military role players to deliver Exercise STEEL DRAGON, with 15 people in total delivering briefs, missions and debriefs on a daily basis. In a demonstration of the Whole Force Approach in action, Inzpire and their military colleagues are supported by QinetiQ, Plexsys and Boeing, who provide both the operating system, and software support which allows the Exercises to run.

Approximately half of Inzpire’s yearly exercise delivery at the ABTC is taken up by training the Army in Joint Fires, and to ensure that the learning environment is optimised, Inzpire’s experts regularly liaise with the Army front line to ensure that training objectives and procedures are both current and relevant.

Inzpire’s Richard Tattersall, ABTC Operations Director, said: “It is very satisfying to see our training audiences improve through the week. We work hard to expose areas of weakness in their processes to allow for development and constantly strive to make them better as a team than they are when they arrive”.

Inzpire has long been at the heart of synthetic training; protecting and promoting military capability by successfully exploiting synthetics and employing subject matter experts wide-ranging operational experience. Inzpire’s broad scope of work with the UK MoD has included Air Land Integration training for both operations and contingency, mission rehearsal for C2 and Combat Air, design and delivery of large-scale air training (both in the UK and internationally) and the integration of live participants into collective synthetic training environments.

Inzpire delivers customised training solutions to its clients to maximise their competency and skills in the integration of Air-Land effects. Focused at individual, team and collective level, our training is developed and delivered by a specialist team of qualified Air-Land Fires Integration, Fire Terminal Control, Precision Targeting and C4ISTAR Instructors.