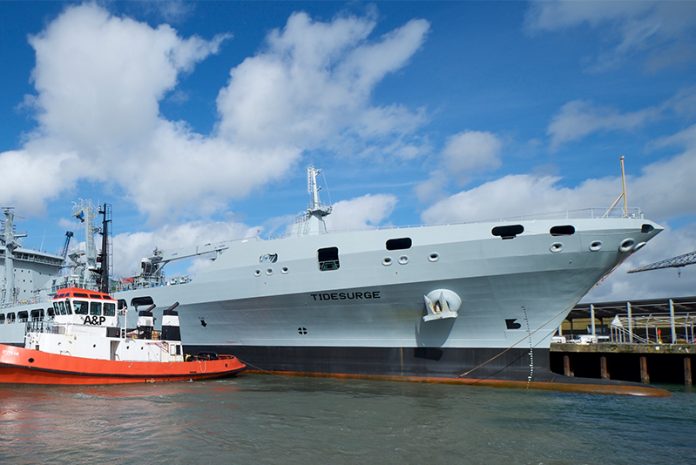 The third of four new support tankers to be delivered to the UK has arrived in Cornwall for customisation and trials before entering service with the Royal Fleet Auxiliary and being deployed on operations with the Royal Navy.

The arrival of RFA Tidesurge comes just weeks after her sister ship, RFA Tidespring, met up at sea with aircraft carrier HMS Queen Elizabeth for the first time.

The detailed customisation work to prepare RFA Tidesurge and her sister ships for operations is being undertaken at the A&P shipyard in Falmouth, sustaining around 300 jobs.

Minister for Defence Procurement Guto Bebb said:
“The arrival of RFA Tidesurge in Cornwall marks another key milestone in the Tide Class programme. Tidesurge will soon join her sister ships in providing the integral support which powers our warships and helps our Royal Navy maintain a truly global presence.”

While in Falmouth RFA Tidesurge will be fitted with UK specific armour, self-defence weaponry and communications systems, with the total UK work content, including A&P, in the Tide Class programme worth around £150 million and sustaining further jobs at 27 UK-based companies.

The customisation work is expected to take around four months after which RFA Tidesurge will begin final sea trials before entering service in Autumn this year.

Meanwhile, RFA Tidespring, which was preparing to conduct a Replenishment at Sea (RAS) refuelling when it met with HMS Queen Elizabeth in February, is currently acting as the training tanker for the Navy’s Flag Officer Sea Training (FOST) and will take part in exercise Joint Warrior in the Spring.  RFA Tiderace, which is currently docked at A&P Falmouth, is undergoing preparations for her capability trials which are expected to commence in early April.

Sir Simon Bollom, Chief of Materiel (Ships) at Defence Equipment and Support, the MOD’s procurement organisation, said:
“I’m proud to say that the delivery of the tanker programme will provide vital support for the Royal Navy, providing it with fuel and fresh water, while also being able to undertake a wide range of maritime operations, including humanitarian relief.”

The fourth of the Tide Class vessels – RFA Tideforce – is expected to be delivered later this year.

A&P Group has held the contract to support and maintain RFA ships at home and abroad since 2008. Under the Cluster Support Programme, A&P Group provides maintenance support to groups of MOD vessels, which include RFA Argus and the RFA Bay Class vessels Mounts Bay, Cardigan Bay and Lyme Bay.

Thank you for the MEWSIC!