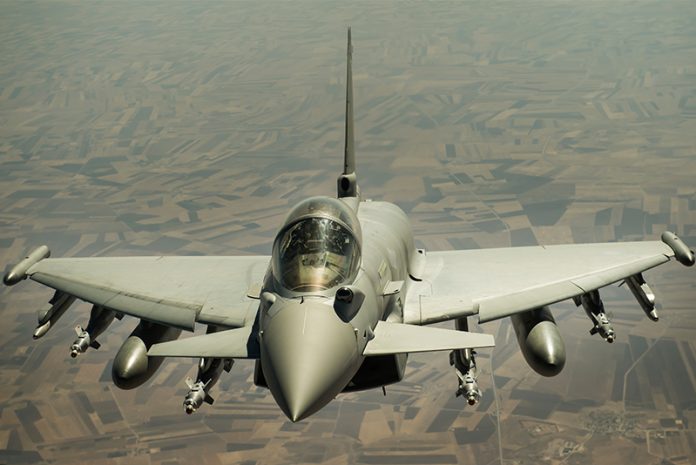 Britain’s Royal Air Force (RAF) celebrated its 100th anniversary on Sunday 1 April 2018. But while the service prepares for an anniversary parade and flypast in London on 10 July, and for a host of other events over the summer, the service is continuing to undertake heavy operational commitments.

The RAF continues to maintain fighters on Quick Reaction Alert (QRA) at both Typhoon Main Operating Bases, ready to scramble to intercept any intruding aircraft at a moment’s notice. A similar QRA commitment is maintained in the Falkland Islands, and the RAF contributes to international peace-keeping, humanitarian relief and Baltic and NATO air policing operations.

The latter have seen the RAF deploying flights of four Typhoons to Estonia, Lithuania and Romania, usually for three month periods. The Baltic Air Policing mission sees rotational deployments of NATO fighters to guard the airspace over the three Baltic states of Estonia, Latvia and Lithuania, which do not have their own air policing assets. The NATO air policing mission saw RAF Typhoons undertake a similar, five-month rotational deployment to Romania to defend NATO airspace over the Black Sea, augmenting the Romanian Air Force’s own existing air defence capability.

Since 2014, the RAF has been flying combat missions against Daesh from its base at Akrotiri on the island of Cyprus, under Operation Shader. This began on 26 September 2014, following a formal request for assistance by the Iraqi government, and initially covered only operations against Daesh targets in Iraq. Tornado squadrons took it in turn to man the six-aircraft rotational deployment at Akrotiri, primarily using the Raytheon UK Paveway IV dual mode (laser/GPS-guided) bomb, but also firing dual mode seeker (DMS) Brimstone missiles. A Tornado dropped the first weapon (a Paveway IV) of the long campaign on 1 October, while another fired a Brimstone, destroying a Daesh vehicle.

On 2 December 2015, the House of Commons approved RAF airstrikes against ISIL targets in Syria, and the following day, the Typhoon joined Operation Shader, initially with six Typhoons and two extra Tornados joining the effort. The Typhoon has used Paveway IV extensively on Shader, and has also used its internal 27-mm cannon to strafe ground targets.

The combat aircraft deployed on Operation Shader have been supported by Airbus A330MRTT Voyager air to air refuelling tanker aircraft, and by a variety of ISR and reconnaissance aircraft, including the Boeing RC-135W Rivet Joint. This made its first operational deployment since entering service in support of Shader, deploying to Al Udeid in Qatar.