At the ILA Berlin Airshow Dirk Hoke, CEO of Airbus Defence and Space, and Eric Trappier, CEO and chairman of Dassault Aviation announced that the two companies would jointly develop a Future Combat Air System (FCAS).

This would be a ‘system of systems,’ that would include weapons and UCAVs, as well as a next-generation fighter aircraft that would complement and eventually replace the Eurofighter and Rafale combat jets in the 2035-2040 timeframe (with FCAS demonstrators flying in 2025). The announcement followed an earlier declaration of intent by French President Emmanuel Macron and German Chancellor Angela Merkel at a Paris-based summit meeting in July 2017.

Hoke proclaimed that this represented a landmark in “securing European sovereignty and technological leadership in the military aviation sector for the coming decades”.

The announcement seems to confirm that the Anglo-French FCAS project is effectively dead in the water. Launched as a two-year feasibility study in 2014, the British and French governments committed to spending more than $2 billion on joint FCAS development, including a full-scale technology demonstrator, following the study, but no contracts were ever signed.

When he presented Dassault’s 2017 financial results, Trappier said that he was “disappointed” by the stalling of what had been a six-year development effort.

The new programme does allow room for other parties to join, and the importance of involving other European defence industrial companies and nations was emphasised – based on government funding and on the principle of best contribution. The French defence ministry subsequently specifically said that Paris would consider the UK as a partner on the wide-ranging project (and even that existing Anglo-French work would continue, to be integrated into the [FCAS] project when sufficiently mature), though it said that the priority was to ensure that the Franco-German link be solid before opening it up to other partners. 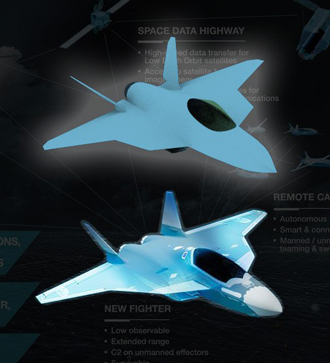 With FCAS representing a ‘Fifth Generation-Plus’ solution to the Luftwaffe’s requirement for a Eurofighter replacement from 2045, there is a nearer term requirement for a Tornado replacement from 2030. The Luftwaffe is understood to have looked at a range of potential Tornado replacements, including the Boeing F-15 Strike Eagle, the F/A-18 Super Hornet, and a new buy of Eurofighters, as well as the Lockheed F-35 Joint Strike Fighter.

Lt. Gen. Karl Muellner, the chief of staff of the Luftwaffe, attracted criticism by appearing to favour the F-35, though Germany has submitted a Letter of Request (LoR) for Pricing and Availability to the US government.

Lockheed have said that the F-35 would be ‘complementary’ to the Franco-German FCAS, and would give the Luftwaffe a useful taste of new technologies, which could facilitate a later ‘generational jump’ with FCAS. Others believe that an F-35 purchase would effectively halt the FCAS programme.

While some within the Luftwaffe favour the F-35 as a Tornado replacement, the German government’s preferred choice is understood to be a buy of some 90 additional Eurofighters, equipped with an enhanced Radar 1+ AESA radar, improved engines developing 15 percent more thrust, a ‘dual role’ (nuclear) capability using the US B.61-12 bomb, and a SEAD (Suppression of Enemy Air Defences) role enhancement package.

Eurofighter CEO, Volker Paltzo said that the “Eurofighter Typhoon is the logical choice for Germany. As well as providing all the capabilities the German Air Force needs, it also guarantees German sovereignty in mission data.”

“If Europe wants a strong defense and a strong industry to deliver it, then Eurofighter is the best choice for Europe,” Paltzo said, calling it “the stepping stone to a European FCAS program.”