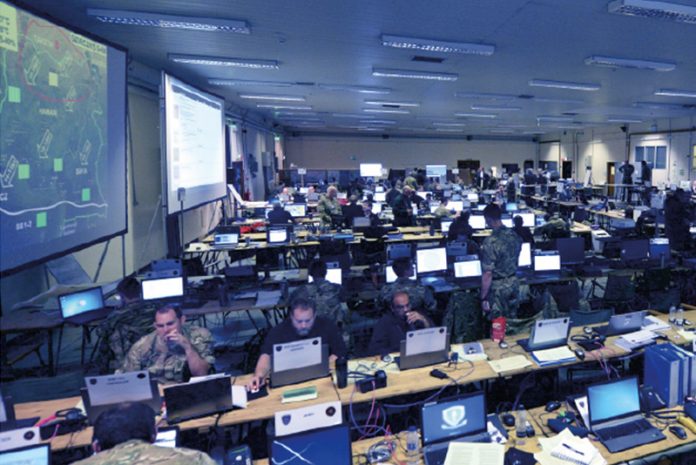 The main aim for JH18 was to train the UK Joint Force HQ in smaller-scale operations, while the aim of JV18 was to exercise the Standing Joint Forces HQ (SJFHQ) over a number of other, wider, training objectives that would be explored during the planning and execution of the two events. Both exercises comprised military personnel and a range of other governmental and non-governmental organisations and partner nations to help develop a pan-governmental/coalition approach to each task.

This level of detail allowed both training audiences to exercise in a deployed setting and, equally importantly, practise joint planning and execution throughout the exercise development process, as the scenario had been crafted, at operational level, to explore and test command and control related interactions. The event was also designed to look at the expanding range of challenges a modern force might encounter in an increasing complex and diverse information-driven environment.

Supporting two testing and distributed exercises was a new challenge for both Joint Warfare and for MASS; throughout the events many previous lessons were reinforced and new ones identified. Working with JW, MASS’ support included a range of Subject Matter Experts (SMEs) from senior military and diplomatic staffs to offer focused advice as members of the ‘Grey Cell’ at the operational level in order to achieve maximum training value for both training audiences. The ‘Grey Cell’ was acknowledged by all participants as ‘the best seen in recent exercises’.

MASS also provided simulation support to replicate forces deployed on the exercise including events management as well as real-life management support at both locations. While the results are still being analysed, the initial feedback is that both events provided excellent training to help shape and inform current and future thinking for both headquarters.

MASS’ expertise in supporting military training exercises was also demonstrated in the recent Exercise JOINT WARRIOR. The two-week exercise took place in the UK and was one of the Europe’s largest military exercises. The exercise was designed to provide NATO allies and partner nations an opportunity to train together across air, land, sea and cyber domains. In the build up to the exercise, MASS’ team assisted the Royal Navy JTEPS team by drafting the Road to Crisis (in two parts) and supporting documents to create the complex scenario required to set the scene prior to the exercise. During the execution phase, a scripter from MASS supported the Exercise Control producing daily the geopolitical input necessary to provide a realistic ‘wrap’ to the exercise training audience.