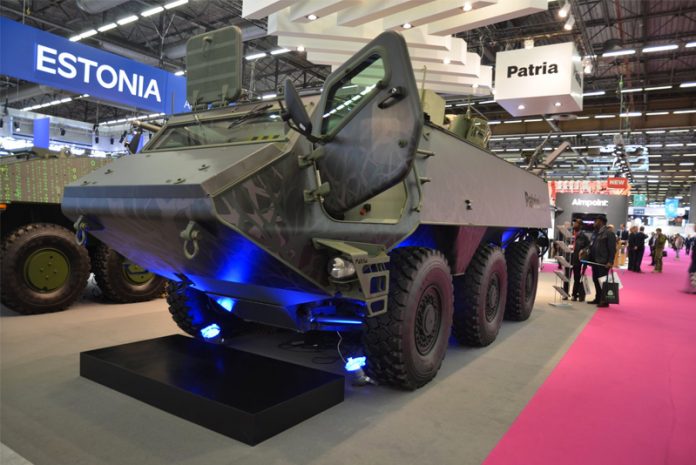 Patria launched at Eurosatory a new vehicle – Patria 6×6, which brings the basic principles behind its predecessor into the present day, with its multifunctional transport capacity and modularity that adapts easily to the customer’s needs.

Patria 6X6 is a successor to the Pasi Armoured Personnel Carrier and to complement the vehicle fleets of customers of the legendary Patria AMV 8X8. Patria 6X6 is a multipurpose transport vehicle. The chassis structure is based on the same components as the AMV, but with one less axle. The vehicle is driven by all three axles and steered from the front two, or all three, depending on its equipage. Optional equipage can be added to bring the 6X6 closer to the AMV. For example, various ballistic and mine protection levels, weapon systems, self-protection systems and other interior equipment are available.

Patria 6X6 can be equipped with a variety of weapon systems and, if required, the Patria Nemo 120mm mortar system. The 6X6 has a maximum load-bearing capacity of 8.5 tonnes. The protection of the armoured 6X6 reaches STANAG level 4, which means protection against even heavy machine gun fire. Due to the 6×6’s good load carrying capacity, it has better protection than previous Pasi APCs. Its mine protection is top-notch, even at the basic level, but up to 10 kilos of mine protection can be achieved.

Boarding and leaving the 6X6 is easy. In addition to the crew of 2-3 persons, the vehicle has seats for ten combat troops, depending on its purpose and layout. The driver can easily adapt to the controls in the 6X6’s truck-like cab. The vehicle is designed as a simple and cost-effective truck-like solution. In terms of durability, it will continue along the trail pioneered by its predecessor, the Pasi. The 6X6 is also a clearly unified concept in terms of its manufacturing technology. If necessary, the final assembly and equipage can easily be completed by a partner in the destination country. The 6X6 meets NATO standards and is ideally suited to e.g. peacekeeping missions anywhere in the world. The vehicle’s life cycle support is an integral part of the Patria 6X6.

“There has long been demand on the market for a successor to the Pasi Armoured Personnel Carrier, which has been in production since the 80s. The new 6X6 brings the basic principles behind its predecessor into the present day, with its multifunctional transport capacity and modularity that adapts easily to the customer’s needs”, says Janne Räkköläinen, Vice President, Vehicle Systems, Patria’s Land business unit. 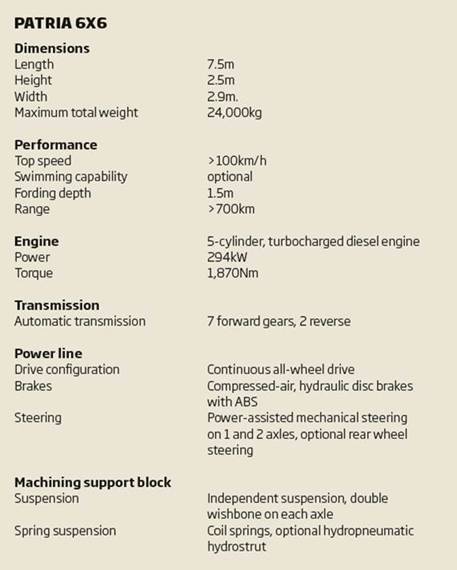