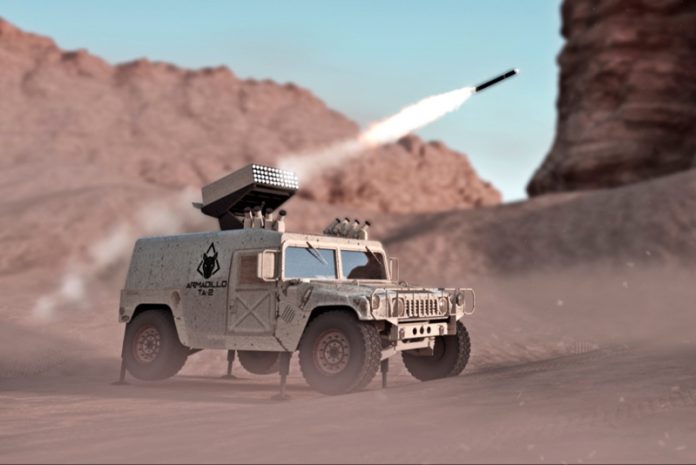 Mac Jee participates at Eurosatory 2018 (Defense & Security International Exhibition), and is one of the highlights at Pavilhão Brazil (Brazil Pavilion), presenting its Armadillo TA-2 rocket launcher.

Eurosatory takes place in Paris (France) from June 11 to 15. The pavilion is coordinated by the Brazilian Defense and Security Industries Association (ABIMDE) and the Brazilian Trade and Investment Agency (Apex-Brasil).

Armadillo TA-2 is a manual or automatic rocket launching system designed for complete retraction in its vehicle during the non-offensive phase of a mission.

The launching platform, patented by the company, operates at 360o and carries three modules, each containing sixteen 70-mm rockets, totaling 48 shots – it also has 48 additional rockets inside an automatic reloading compartment. The development of the system began in 2015 and should be finalized at the end of this year.

The prototype is already being built and will be installed in the vehicle of the American company AM General, model M1152 HMMWV. After assembly, the Armadillo TA-2 is undergoing testing at the CAEX (Army Assessment Center) in Rio de Janeiro, Brazil. The expectation is that the system will be produced in scale from 2020 at the new Mac Jee plant in Capivari (SP), Brazil, which will have capacity for 50 to 100 units of the system.

“We had the idea of creating and patenting a simple, compact system capable of meeting the demand for smaller cars fitted with rocket launchers for the Armed Forces,” explains the CEO of the company, Simon Jeannot.