Longview Aviation Capital of Victoria, British Columbia, in cooperation with Viking Air Limited, has signed a contract with Cascade Aerospace of Abbotsford, British Columbia to provide training and resources in support of the Viking CL-415EAF (“Enhanced Aerial Firefighter”) Conversion Program.

The initial Viking CL-415EAF turbine conversion will be conducted at Cascade’s facilities at the Abbotsford International Airport, and is scheduled to commence in September 2018. Cascade will provide training to Longview observers during the initial conversion at their Abbotsford facilities, and will send support staff to provide on-site training at Longview’s facilities in Calgary, Alberta for the second and subsequent CL-415EAF conversions. 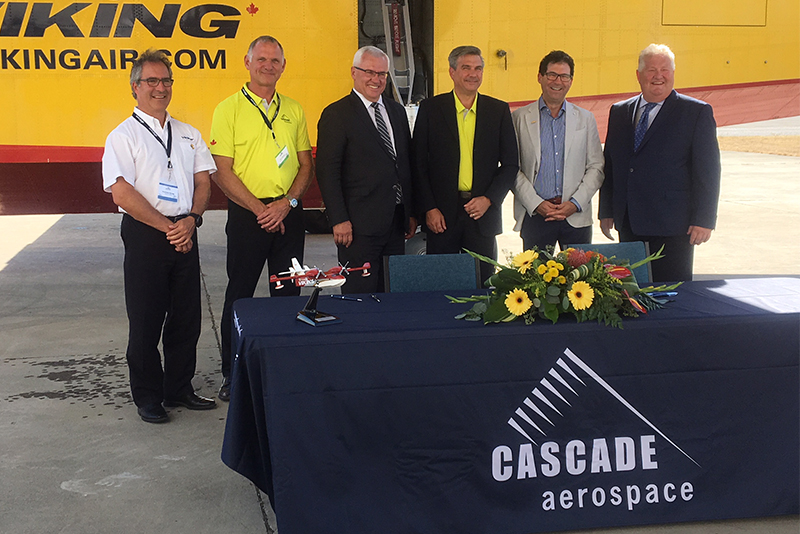 “Cascade is both well-respected and well-established in the aerial firefighting community. We’re confident their proven track record as a 214/415 Centre of Excellence converting Canadair CL-215 aircraft to turbine configuration will contribute to the on-time delivery of the initial CL-415EAF Enhanced Aerial Firefighter,” said David Curtis, Chairman of Longview Aviation Capital. “This is a complex modification, and their expertise will lend itself to the development of the broader conversion program as a whole.”

Kevin Lemke, Executive Vice President and COO of Cascade Aerospace, voiced his support for this program – “I’m enthusiastic that Cascade can offer Longview and Viking, two Western-Canadian companies, the advantages we’ve developed over hundreds of thousands of hours of experience working on CL-215 aircraft. We’ve enjoyed many years of successful collaboration with Viking over the years on other programs and look forward to many more on this specialized Canadian platform. I’m confident that Cascade’s honed expertise in the conversion process will substantively contribute to the success of the new Viking CL-415EAF program.”

To initiate the conversion program, Longview is hiring up to 150 technical and support staff members at its Calgary facilities, where eleven specially selected CL-215 aircraft will undergo modification to CL-415EAF configuration utilizing Viking-supplied conversion kits.

The turbine conversion kits will be developed and produced at Viking’s facilities at the Victoria International Airport, where Viking has already hired 50 employees in support of the program.

The Viking CL-415EAF Conversion Program forms part of a staged approach to utilize the advancements made with the Longview converted aircraft as the basis for the proposed Viking CL-515 new-production amphibious aerial firefighting aircraft.