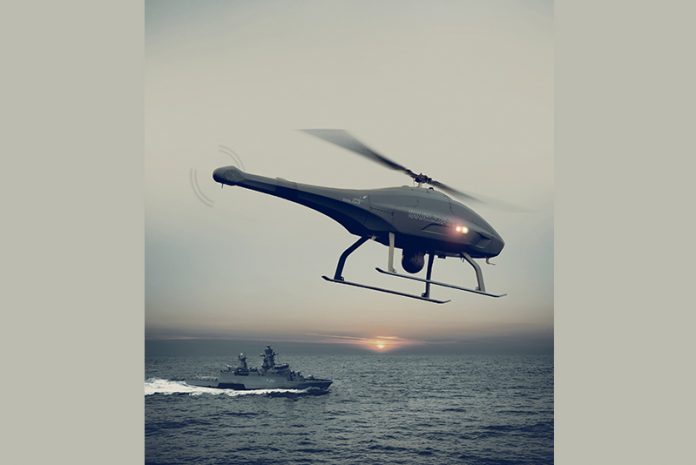 EURONAVAL, Paris: Following the announcement in August that the German Navy will be the first customer for UMS Skeldar’s V-200B unmanned aerial vehicle (UAV), an agreement has been reached with Finnish company Scanfil to secure a volume production line.

David Willems, head of business development for UMS Skeldar said that the German Navy concluded its testing of the V-200B in January this year, with delivery of the two systems agreed for Q3 219. “We will train their operational and maintenance personnel then they will operate the systems onboard ship,” said Willems.

Testing required the V-200B to complete a range of activities over a four hour period, although Willems confirmed that the UAV’s mission profile was established at around five hours with a complete payload of around 45-50kg. One of the challenges is to site the antenna for the communications system for the UAV in such a position on the vessel that neither interferes with the others electronics emissions.

The German Navy will begin operations with two heavy fuel rotary V-200B systems which will operate on board its Corvette-class 130 vessels by the end of 2019. The contract is being delivered through prime contractor Elektroniksystem- und Logistik-GmbH (ESG) working with the Federal military procurement agency Federal Office of Bundeswehr Equipment, Information Technology and In-Service Support (BAAINBw).

It is likely that the V-200B will be operated onboard alongside the German Navy’s Lynx Mk88As to extend the reconnaissance capabilities of the vessel, which has already been a proven combination by UMS in previous trials with the Spanish Navy. The German requirement has been for a sensor turret and one additional undisclosed system.

“We hope this will become a long-term asset for the German Navy and that additional requirements will see it onboard other vessels in the Navy’s fleet,” said Willems.

In January 2019 Scanfil will begin the manufacture of a further ten V-200B systems at its manufacturing facility at Åtvidaberg, 30km away from UMS Skeldar’s own Swedish base in Linköping, where the completed aircraft will go for systems integration. While the current production cycle is established at between 7-9 months, Willems states that this time is likely to be halved through the familiarisation of industrialisation as the production line grows.