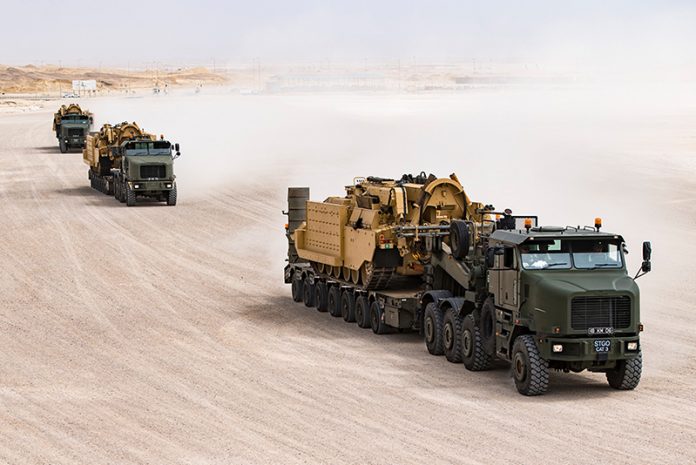 David Oliver – In late August 2017, the then British Defence Secretary, Sir Michael Fallon, and his Omani counterpart signed an agreement that will secure the use of facilities at the Duqm Port in the Sultanate of Oman by the British Armed Forces, especially the Royal Navy (RN), ahead of the completion of a new UK Joint Logistics Support Base (UKJLSB) at the port that was established in the lead up to the recently staged Joint Exercise Saif Sareea 3 (SS3), thereby giving Britain a strategic and permanent maritime base east of Suez and close to the Persian Gulf.

Duqm Port is the only port designed to support the RN’s Queen Elizabeth-class aircraft carriers in the Gulf region which is witnessing a more permanent return of UK forces. The naval logistics centre in Duqm is operated as a joint venture between Babock and Oman Drydock Company.

In the lead up to SS3 over 200 vehicles including Warrior armoured fighting vehicles, Scimitar CVRT (combat vehicle reconnaissance tracked) and Bulldog personnel carriers, plus containers were unloaded from two roll-on / roll-off ships before being prepared for the exercise at the UKJLSB. The Army Air Corps three Boeing AH-64 Apache AH.1 helicopters and all of the associated equipment and munitions were sent by sea to Oman.

The shipping of the equipment for the exercise was co-ordinated and delivered by Joint Forces Command (JFC), who co-ordinated sea and air transportation prior to and following the exercise.

After preparation for service the vehicles were carried by military and civilian transporters to their desert training areas. The UK has a 37-year lease on the UKJLSB which comprises workshops, vehicle hangars and an ammunition disposal plant.

At the end of the SS3 the vehicles were returned to the UKJLSB for processing and washing before being loaded on the ships at Duqm Port for their return to the UK. A large number of Army vehicles including Challenger 2 MBTs will remain at the UKJLSB from where they will be made available for the planned Exercise Khanjar that will focus initially on training on a regular basis with armoured vehicles in a desert environment in Oman’s interior.