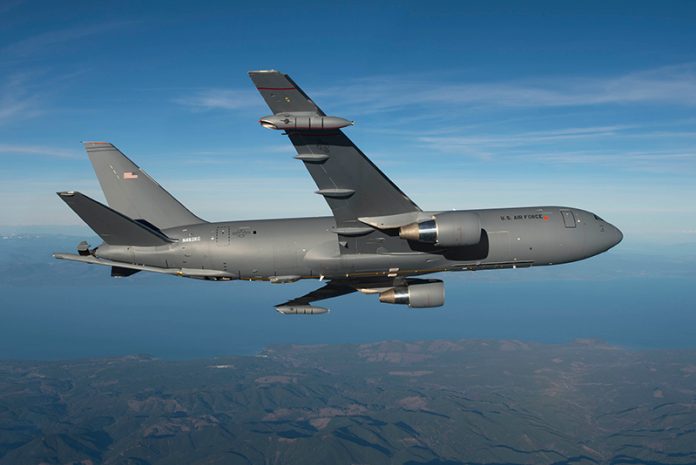 Jon Lake – Boeing has announced that its KC-46A Pegasus tanker has completed the second phase of flight testing in support of receiver certification.

US Air Force (USAF) and Boeing crews began receiver certification testing with F-16 aircraft in April 2018, and since then the KC-46 has refuelled other KC-46s, as well as the Boeing B-52 Stratofortress, Boeing KC-135 Stratotanker, Boeing F/A-18 Super Hornet and Fairchild Republic A-10 Thunderbolt II.

Over the course of testing, six KC-46A test aircraft have completed more than 3,700 flying hours and have transferred more than four million pounds of fuel to receiver aircraft.

Completion of Phase II prepares the ground for initial operational test and evaluation next year, and for Phase III receiver certification testing, which will be conducted in 2019, and which will include additional receiver aircraft.

Boeing is on contract for the first 52 of an expected 179 aircraft to meet the USAF’s KC-X requirement. These will replace those National Guard KC-135E aircraft that still use TF33 engines. Japan has also ordered a single KC-46, to augment its fleet of four KC-767 tankers.

The KC-46 programme has been dogged by delays and cost overruns, and the planned delivery of 18 aircraft to the USAF by October 2017 did not happen, and there are still a number of unresolved category-1 deficiencies, including two related to glare on the “remote vision system” camera that is used to guide the aircraft’s refuelling boom, as well as a “drogue disconnect” issue. Boeing insists that the first aircraft will be delivered before the end of 2018.

In March Air Force Secretary Heather Wilson told the House Armed Services Committee of her frustrations with Boeing, who she accused of being “much more focused on their commercial activity than they are on getting this right for the Air Force and getting these airplanes to the Air Force.”

In September, the USAF estimated that it would need 14 more tanker squadrons to meet the requirements of the National Defense Strategy, additional to the planned 179 KC-46 tankers for KC-X, and those planned to replace 59 KC-10 Extenders and about 200 later KC-135Rs under the KC-Y and KC-Z requirements.

These requirements for extra tanker aircraft will not necessarily mean further orders for Boeing’s KC-46. Lockheed and Airbus have teamed to offer aerial-refuelling services to address any capacity shortfall and to meet requirements for the next generation of tankers using the Airbus A330 Multi Role Tanker Transport (A330 MRTT), a version of which was originally selected for KC-X before a Boeing protest. The A330 MRTT carries significantly more fuel than the KC-46, and has been more successful than the KC-46 in winning export orders.

Going Up in the World

Going Up in the World