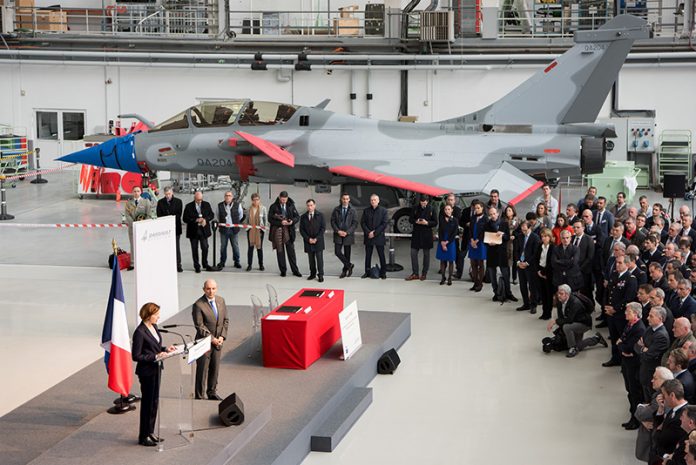 Jon Lake – On 14 January 2019, the French government signed a $2.26 billion (€2 billion) contract with Dassault Aviation for a batch of 28 Rafales and at the same time approved the development of the new F4 standard.

Like the rival Eurofighter Typhoon, the Rafale has seen a progressive, incremental increase in capabilities, integrated via successive ‘standards’ which have been embodied to particular batches on the production line, or sometimes by retrofit of older aircraft.

The new F4 standard is reportedly receiving twice as much funding as the F3-R version and will see the integration of the 1000kg AASM missile, the Mica NG AAM (air-to-air missile), and an improved version of the ASMP-A nuclear cruise missile. F4 will also include an upgraded radar, Helmet-Mounted Display capabilities and improved network-centric warfare enhancements with (satellite communications and higher data exchange rates).

Many of the aircraft in the recently ordered batch of 28 aircraft will reportedly “benefit from some of the improvements of the F4 standard” and will be delivered from 2022-2024. They will bring French orders to 180 aircraft, consisting of 48 single–seat Rafale Ms, 63 Rafale B two-seaters and 69 single-seat Rafale Cs. Egypt, India and Qatar and have signed contracts for 24, 36 and 24 aircraft respectively, bringing the order total to 264 aircraft.

The F4 standard is due to be qualified by 2024, and will form the basis for future exports (perhaps to Switzerland, the UAE, or for any additional Egyptian or Qatari order) though some ‘strategic’ F4 modifications can’t be exported.

A second tranche of 30 F4 standard Rafales will be ordered in 2023 and delivered by 2030. bring the total to 210. These aircraft will incorporate the full F4 modifications. The le Figaro newspaper (owned by Dassault) has reported that the F4 standard will also be embodied in the existing in-service Rafale fleet by retrofit.