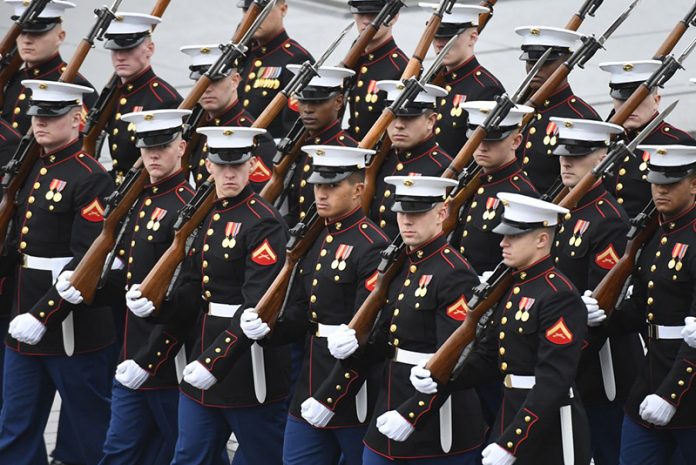 This year’s show features the Amphibious Combat Vehicle – which will supplement and ultimately replace the aging Assault Amphibious Vehicle, as well as an overview of Marine Corps physical fitness initiatives, and an opportunity for Marines to sustain their battle skills. The Marine Corps League and Marine Corps Installations West will jointly host the 28th Marine Corps West Exposition.

The 2019 expo provides Marines and other military and civilian defense personnel with opportunities to interface with manufacturers showcasing the best and newest hardware produced for military personnel worldwide.

The Amphibious Combat Vehicle is designed to fulfill the complex mission objective of deploying Marines from ship to shore. The ACV is an 8×8 platform possessing open ocean capability, land mobility, survivability, payload, and the potential to accommodate future system upgrades and multirole mission packages. Initial production vehicles are expected to be delivered to the Marine Corps in the fall of 2019.

Col Stephen Armes, USMC, Director Force Fitness Division, will provide an overview of the Marine Corps Physical Fitness program and some of the major changes to date. Additionally, he will cover future initiatives that are being taken to professionalize the way in which the Marine Corps approaches physical fitness, and continues to embrace the athletic warrior mindset.

Warrior Day will take place on show site at 7 am on Friday, 8 Feb, and is an initiative to make the Marine Corps West Expo a more interactive and participatory event for Marines. Warrior Day will commence with a two-mile formation run led by SgtMaj Mike Barrett, USMC(Ret), the 17th Sergeant Major of the Marine Corps. Following the run, Marines will be split into groups to rotate through the six “Battle Skills” training stations at 10 minute intervals. Additional information and registration is available at the following link: https://www.marinemilitaryexpos.com/marine-west/warrior-day/.

The Marine Corps West Exposition is one of the largest multi-day annual events taking place aboard historic Marine Corps Base, Camp Pendleton, home of the First Marine Expeditionary Force. The show hosts more than 100 exhibitors and approximately 3,000 attendees. The opening ceremony will begin at 9:45 a.m. Thursday and the exhibits will be open from 10 a.m. until 3 p.m. Friday the hours will be 9 a.m. to 3 p.m. Show location is “22 Area Parade Deck” adjacent to Vandergrift Blvd on Marine Corps Base Camp Pendleton. Exposition details and updated schedules can be found at www.marinemilitaryexpos.com.