Home Regions Europe Rosoboronexport to present main novelties of the year at IDEX 2019 in... 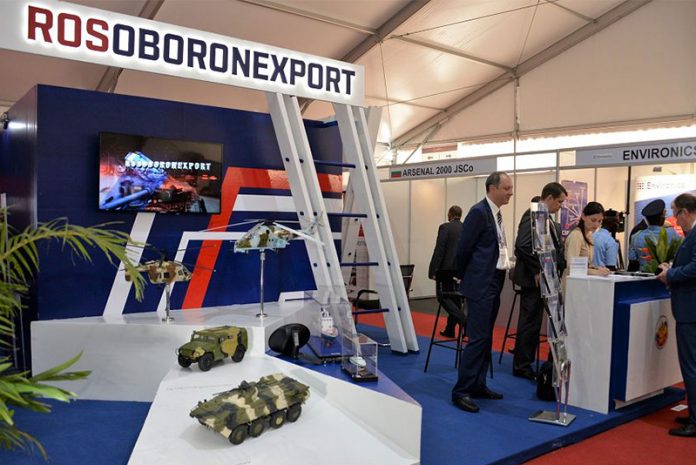 Rosoboronexport, a subsidiary of the Rostec State Corporation, is organizing a demonstration of modern and most demanded Russian weapons in the world at the IDEX 2019 International Defense Exhibition, which was held in Abu Dhabi (UAE) from February 17 to 21.

“The Middle East and North Africa (MENA) countries are extremely important markets for us where we implement a lot of projects both in civilian areas and in the field of military-technical cooperation,” said Sergey Chemezov, Director General of the Rostec State Corporation. “More than 50 Russian defense enterprises will demonstrate their innovations at IDEX 2019. In total, about a thousand items will be exhibited, and we’ll show a number of pieces of military hardware for the first time.

The IDEX exhibition has been held since 1993 and is now rightly regarded as one of the most representative international platforms for showcasing weapons and security technologies. Russia has always been and continues to be its active participant.

“Each time, Rosoboronexport shows the latest additions to its export catalog here, and this year will be no exception. In the framework of a single Russian display, organized by the company, we will present our foreign partners with more than 200 advanced pieces of weaponry for all services of armed forces. I am sure that IDEX 2019 will traditionally open new horizons in the Arab East, the key region for our company, which accounted for almost half of our deliveries in 2018,” said Rosoboronexport Director General Alexander Mikheev.

For the first time, Rosoboronexport and NPO High Precision Systems are organizing a demonstration of the Pantsir-ME naval air defense missile/gun system at an exhibition held abroad. The system has been designed and manufactured by the KBP Instrument Design Bureau named after Academician A. Shipunov. Presentations will be held on February 18 and 19 at NPO’s stand (09-C20) in the center of IDEX-2019 where its full-scale version is installed.

The newest Kalashnikov AK-200 series assault rifles (AK200, AK203, AK204 and AK205) will be displayed for the first time at Kalashnikov Concern’s stand. Rosoboronexport will hold presentations of these rifles in the course of negotiations with foreign customers on the supply of small arms.

On February 20, the company will hold two presentations of advanced products, “Russian-made Air Defense Systems” and “Small Arms, Special Weapons and Close Combat Weapons,” in Briefing Room-Capital Suite No. 5, during which its specialists will tell about new and the most popular products.

In addition, on February 18, will be held a presentation of the commercial and industrial potential of the Republic Tatarstan, which produces a lot of weapons and military equipment for export. This event will be held at Rosoboronexport’s stand (09-C15).

Foreign customers are expected to show keen interest in products that have been tested in real combat conditions during the antiterrorist operation in Syria. Such models have already become the undisputed leaders in their segments of the world arms market: Su-35 and MiG-29M fighters, Mi-28NE and Ka-52 attack helicopters, T-90S MBT, BMPT fire support fighting vehicle, Kornet-EM ATGM system, S-400 Triumf anti-aircraft missile system, the Repellent anti-UAV electronic warfare system, as well as ships and submarines equipped with the Kalibr integrated missile systems.

Rosoboronexport has a busy schedule at IDEX 2019. The company expects to meet and hold negotiations with government officials, senior military officers and business representatives from the Middle East and North Africa countries.