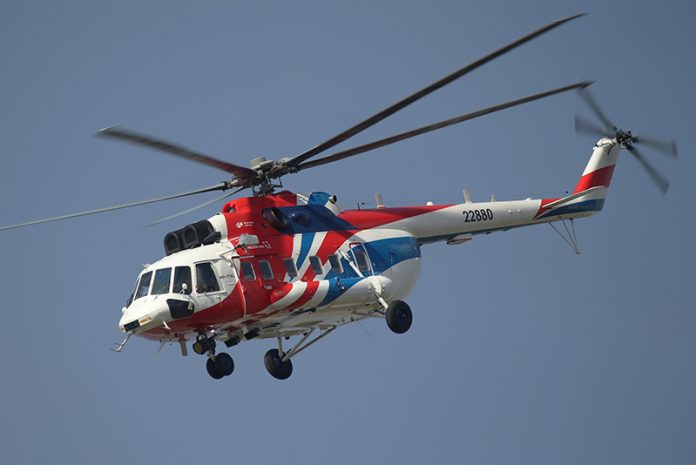 Brazilian aviation authorities will decide on the certification of the helicopter for the local market based on its application.

“Brazil is our long-time partner and one of the key countries in South America for the promotion of Russian helicopter products. Mi-171A1 helicopters have been successfully operating in the country for more than 10 years, and I am sure that the new helicopter will soon also have the opportunity to earn a positive reputation. Brazil’s certification authority is processing the documentation received on the Mi-171A2. Considering experience certifying the Mi-171A1 helicopter, I think that this issue will be resolved in a short time,” said general director of Russia Helicopters Andrey Boginsky.

“In light of Brazil’s high demand for mid-class multipurpose helicopters, we are bringing to the local market a new machine — modern, roomy and reliable. The Mi-171A2 helicopter provides long range, which is important for a country where the machines are operated in hard-to-reach areas. We intend to develop after-sales service as part of an international partnership to guarantee maximum operational life and as a prerequisite for flight safety,” added director of the Rostec aviation cluster Anatoly Serdyukov.

In 2005, the Mi-171A1 helicopter optimized for the requirements of European commercial operators and the FAR-29 aviation regulations received approval for the Type Certificate in the Brazilian Aviation Register. During its development, special attention was paid to safety issues. In the same year, the first Mi-171A1 helicopter was delivered to Brazil.

In 2010, the Mi-171A1 helicopter, presented by the operating company Atlas Taxi Aereo, won a Brazilian state oil and gas company Petrobras tender to carry out aerial work in the Amazon due to its positive characteristics and price/quality ratio.

The T-HUMS system (onboard monitoring and diagnostics system) was installed in the new Mi-171A1 helicopter for the first time on an order by the Brazilian company. It provides automatic monitoring of a large range of nodes in real time, significantly increasing flight safety. The use of the T-HUMS system also makes it possible to transition to maintenance “as-is,” and not according to the regulations, which can significantly reduce the financial costs of the operating company and increase the efficiency of the helicopter business.

Mi-171A1 helicopters were used by Atlas Taxi Aereo in harsh environmental conditions to support Petrobras drilling in the rainforests of Brazil, and they showed their best side. In a year of intensive operation, one helicopter, for example, flew more than 1,000 hours (an average of 120 hours per month), moving about 600 tons of cargo, mainly drilling equipment, on an external mount.

The Mi-171A2 was developed based on this helicopter, the result of a thorough modernization of the Mi-8/17 helicopters. More than 80 changes have been made to the design of the Mi-171A2. The helicopter is equipped with VK-2500PS-03 engines (a civilian version of the engines installed on the Mi-28 combat helicopters) with a digital control system. One of the most important differences between the Mi-171A2 and the helicopters of the Mi-8/17 family is the new carrier system. The helicopter has a more efficient X-shaped tail rotor and a new main rotor with integral composite blades with an improved aerodynamic layout. In August 2017, the helicopter received a Type A certificate from the Russian Federal Air Transport Agency, which indicates implementation of the most stringent safety requirements for civilian helicopters.