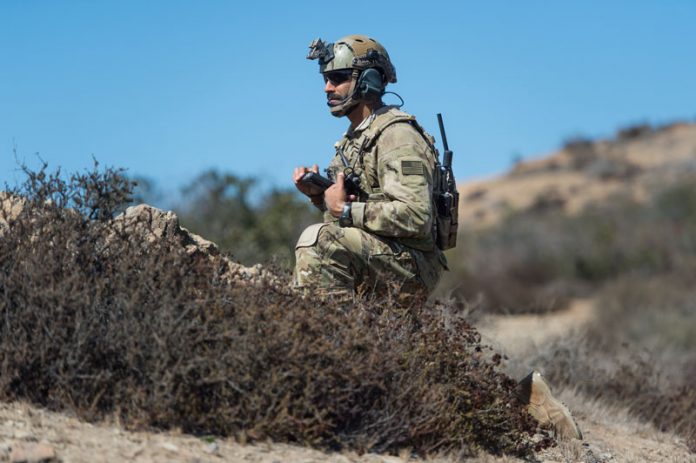 The introduction of the world’s first and only Link-16 compatible handheld radio is set to revolutionise close air support.

The North Atlantic Treaty Organisation’s Link 16 Tactical Datalink (TDL) has revolutionised air operations since its introduction in the early 1980s. The ability to share track and tactical information with other participants in the air battle on the ground, at sea or in other aircraft using the TDL’s ultra high frequency communications has made air operations more responsive, precise and better coordinated. This has been witnessed time and again in the skies above Afghanistan, Iraq, the Balkans and Libya during NATO and US-led operations over the past three decades.

The significant benefits offered by Link 16 are now migrating to the Close Air Support (CAS) mission. Traditionally CAS has been a challenging and dangerous mission. Aircraft overhead carrying ordnance, often moving at high speed, are ‘talked onto’ their targets by a Joint Terminal Attack Controller (JTAC) on the ground. The standard tool that has been at the JTAC’s disposal is the ‘nine line’ brief. This is a written list of target coordinates, positions of friendly troops, hostile air defences, desired time on target and type of effects requested, to name just five criteria, read aloud by the JTAC to the pilot. The pilot then writes down, inputs the information into his mission computer, and repeats some of these back to the JTAC for confirmation. Amid the cacophony, chaos and speed of battle, such an approach leaves a margin for error where instructions can be misheard or miswritten with potentially disastrous consequences.

Viasat’s AN/PRC-161 BATS-D handheld radio takes a major step forward in improving the safety, speed and precision of the CAS mission by utilising Link-16. The first, and only, handheld radio of its kind the AN/PRC-161 is in service with the US special operations community and provides a way for JTACs and other troops involved in CAS to send and receive data digitally regarding the CAS mission using Link-16. The use of digital information helps to avoid ambiguities or mistakes that can plague voice communications and accelerates the pace of the engagement. Usefully the radio can also perform voice communications using Link-16. This additional step can help clear up any questions or uncertainties with the digital communications and vice versa.

Enhancing the CAS mission with robust digital communications is a must for armies and air forces around the world. Recent operations in Central Asia and the Middle East have witnessed CAS frequently being performed in urban areas. Air-to-ground missions in such environments carry the serious risk that civilians and civilian infrastructure can be targeted in error with the commensurate harm that this causes not only in terms of lives and property needlessly lost, but also to armed forces’ reputations for professionalism. At the same time fratricide, or ‘blue on blue’, incidents where friendly troops are killed by their own side in error is an ever-present danger on fast-paced contemporary and future battlefields. During operations in Afghanistan publicly available figures note that at least 23 NATO troops were mistakenly killed in CAS missions, with 30 losing their lives in similar circumstances in Iraq. What the Prussian military theorist Carl von Clausewitz called ‘the fog of war’, where uncertainly can hamper situational awareness in military operations will probably never lift completely. Nonetheless innovations like Viasat’s AN/PRC-161 BATS-D help immeasurably to improve situational awareness during CAS missions improving precision and saving lives.

Clear Communications in the Shadows