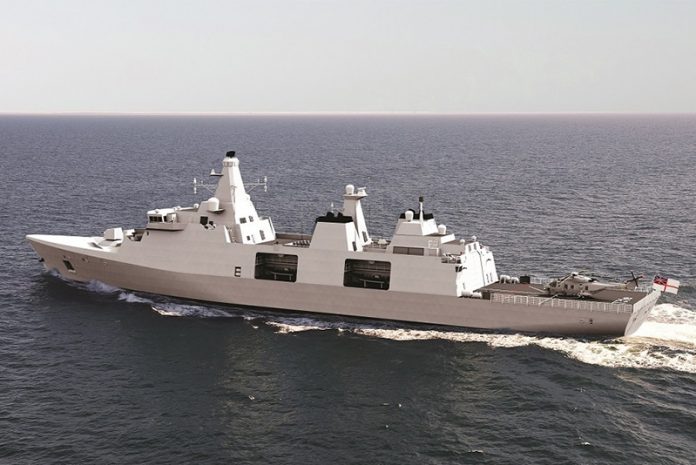 The Arrowhead 140 design – based on the Royal Danish Navy’s (RDN’s) in-service Iver Huitfeldt-class frigate, and to be delivered by a Babcock-led team that includes Thales, BMT, and OMT – was downselected in September 2019. Five of the 140m long, 6,000-tonne, 27 knot top-speed platforms are planned, with delivery by 2028.

Speaking at the conference in London in late January, Mark Harvey, deputy programme director for Babcock’s ‘Team 31’ said: “One of the core requirements from the United Kingdom Ministry of Defence was to make sure this ship was adaptable through life, because in warship acquisition and the total through-life cost of any warship, acquisition is only about 40 percent of the total cost.

“You spend 60 percent of [the] funds on upgrading and updating that ship through the course of life because technology is changing so rapidly,” he added

“So, how do you keep those costs down?” Harvey asked. “Well, we think we’ve got part of the answer in Type 31.”

Harvey pointed to several examples of how the ship’s design supports adaptability in different ways to deliver through-life flexibility, survivability, maintainability, and affordability.

“For the platform to achieve the [required] outputs…we’ve got a vessel that is routinely crewed by 100 personnel. Berthing space on board is not at a premium; there’s over 180 permanent berths,” Harvey said.

However, he continued, “being able to be routinely operated by 100 personnel – and that’s doing routine operations – allows you to enhance the crew when you embark [a] helicopter, or you do special forces operations, or you’re doing disaster relief, or many of the multiple requirements”.

Key here, he said, are “concurrent capabilities: not having to re-role the ship every time you want to do something new.”

He noted that the propulsion system construct – two diesel engines for each of the two propeller shafts – is “simple, straightforward, reliable, and meeting the survivability requirements.”

Moreover, he noted, the propulsion arrangement design includes fore and aft engine rooms separated by the engineers’ workshop, with a blast bulkhead introduced for survivability. “You take a hit forward, you’ve still got the move function aft, and vice versa.”

The large platform’s 5m draught can also accommodate vertical launchers deep enough to carry various strike-length missiles. Such flexibility supports the ability of the ship to be re-rolled, mid-deployment.