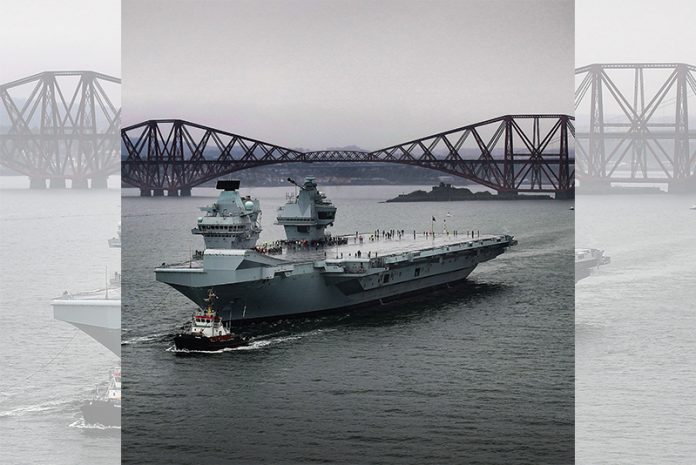 The UK Royal Navy (RN) is seeking to use its aircraft carrier programme as an opportunity for industry to demonstrate new maritime unmanned systems technologies.

Speaking at the Defence IQ Surface Warships conference in London on 30 January, RN First Sea Lord and Chief of the Naval Staff Admiral Tony Radakin said his service, together with the UK Royal Air Force (RAF), “is looking at using HMS Prince of Wales in 2021 as an experimentation platform … with a view to challenging our services and industry as to whether or not we can get large drones flying from the aircraft carrier as a technology demonstrator inside the next five years”.

HMS Prince of Wales is the second of the UK’s two, 65,000-tonne Queen Elizabeth-class aircraft carriers. Commissioned on 10 December 2019, the ship will conduct its first fixed-wing flying trials off the US east coast in 2021.

Although acknowledging that thinking on the project’s scope remains loose, the First Sea Lord stressed the idea “is about … how to get organisations to bend and change and to buy into the future.” In what is a UK-wide project for delivering carrier capability, Adm Radakin asked “as part of that journey, if these are the most advanced aircraft carriers in the world, how do we keep them at the leading edge of that?” “In a world where there’s a technology revolution that’s ongoing, it is about cultivating that approach,” he added.

“So, when I look at Prince of Wales,” the admiral continued, “when we look at the ship’s programme, in 2021 can we have months when we’re operating off the East Coast of the United States where we look deliberately to do some experimentation?” “That, to me, is a challenge to industry to cultivate and buy into this thinking. It’s a challenge to ourselves.”

“It’s obvious we’re going to be flying drones off all our ships,” said Adm Radakin, “but then you get into the scaling of the carriers, and then you have to say ‘well, how would you do that and what do you want to do?’ At this stage, it’s just laying down a challenge … to cultivate what comes from there.” “I think where we will be is in the realm of technology demonstrators in order to lead to something beyond that,” he said.

Speaking at the Defence and Security Equipment International (DSEI) exhibition in London, he said the RN would use its ‘Joint Warrior’ exercise series to host ‘Unmanned Warrior’, as a stage “for industry to demonstrate autonomous systems in a relevant tactical setting” and “to show how its technology and developmental expertise could change the way we operate”.

‘Unmanned Warrior’, which took place off Scotland’s west coast in September and October 2016, was a pivotal waypoint in the RN’s journey to date towards using unmanned systems.