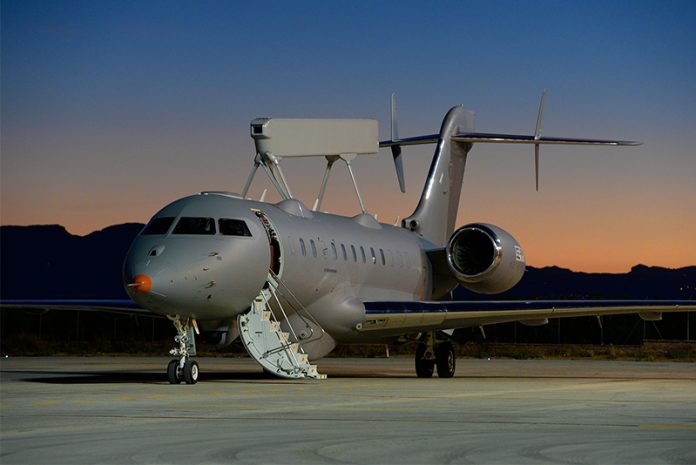 On Wednesday 29 April the UAE Air Force took delivery of its first Saab GlobalEye Swing Role Surveillance System aircraft which had been flown from Sweden the previous day.

The GlobalEye is based on a Bombardier Global 6000 business jet airframe with Saab’s new Erieye Extended Range Radar incorporated.

Micael Johansson, president and CEO of Saab, called the event ‘an important milestone’ for Saab as the UAE Air Force is the launch customer for GlobalEye. An further two of the type were ordered in the same contract signed in late 2015 and these will be delivered on schedule – Johansson adding that “it won’t take years.”

There may yet be an addition to the original order as Johansson confirmed that discussions remained ongoing over “a contract amendment’ which could lead to the UAS acquiring a further two GlobalEye systems.

Prospects for further GlobalEye sales lie with Finland, South Korea and two other unnamed countries said Johansson, adding that he also hoped that Sweden would eventually become a customer when it decided to upgrade its existing capability.

The COVID-19 pandemic has not impacted the delivery schedule as Johansson confirmed that most of the workforce was at Saab’s manufacturing sites which were open with work going ahead as planned. In terms of how the pandemic might effect future sales of the GlobalEye equipped with Erieye, Johansson said: “Political tensions are unlikely to decrease – having a safe country and [national] situational awareness will not disappear.”