The effect of COVID-19 on world defence spending will have a major impact unless governments address the issue now to ensure that, perhaps most importantly of all, the industrial supply chain does not wither and collapse.

The pre-COVID-19 threats still exist, and the widespread cutting of national defence budgets would not only impact national industries, but perhaps lead to a de-stabilisation in strategic balances.

The challenge for government defence spending will be how to address all the threats that still exist and have not gone away, despite the pandemic, without specialising and narrowing the band of issues being faced, stated Bastian Giegerich, director of Defence and Military Analysis at the International Institute for Strategic Studies (IISS).

Speaking during a podcast entitled The future of European defence spending in a post-COVID world, on 22 June, He said that in the case of the Europeans, they had tended to compare the speed at which they are moving in terms of spending on defence with a few years ago, rather than addressing whether that is still enough now that there has been a return to Great Power competition.

Fenella McGerty, senior fellow for defence economics looked at the global picture of defence and found that “some countries have already announced adjustments to their 2020 defence budget including Indonesia, South Korea and Thailand, and have redirected funds to crisis relief and economic stimulus.”

In the Middle East, Saudi Arabia had already altered the defence budget before the crisis had taken effect but now Bahrain and the Sultanate of Oman had followed that example.

She said that the outlook for Europe and North America was negative, but that there was an understanding that support for the defence industry was necessary.

“There is a recognition that defence was cut after the global financial crisis which had negative implications. In areas such as in the aerospace and defence industry in Europe, the commercial side was able to carry defence through the last crisis, but the commercial side is now far more affected, which has led to governments prioritising certain defence programmes to maintain local defence industry and the supply chain.”

The stimuli for increased defence spending among NATO members in recent years had come from three factors: economic improvement (since the financial crisi; the Russia annexation of Crimea; and the pressure from the US as well as that country’s pivot to Asia. These had resulted in stronger defence spending in Europe.

McGerty said that factors had changed: the security threat to Europe means that it is not as secure as it was; economic contractions are more severe; and the US retreat from involvement around the world could still trigger European defence spending.

Giegerich illustrated one area that had been impacted already. Looking at the plan for the European Defence Fund, he said that some of the flagship programmes had already been cut, such as military mobility, by the end of 2019 because member states could not agree on fund allocation.” However, some funding has now been reinserted although still not as much as originally envisaged.

Giegerich questioned whether governments would bring money forward that had been planned for future years to try and support industry, although there were limits on how much could be done.

In terms of trans-Atlantic relations, he questioned the scope of President Trump’s withdrawal plan, and said that a lack of strategic rational from the US President when it comes to NATO and the lack of meaningful consultation with allies, which is what the trust and predictable behaviour of alliances is based. However, European nations continue to rely on US defence support for the near future. 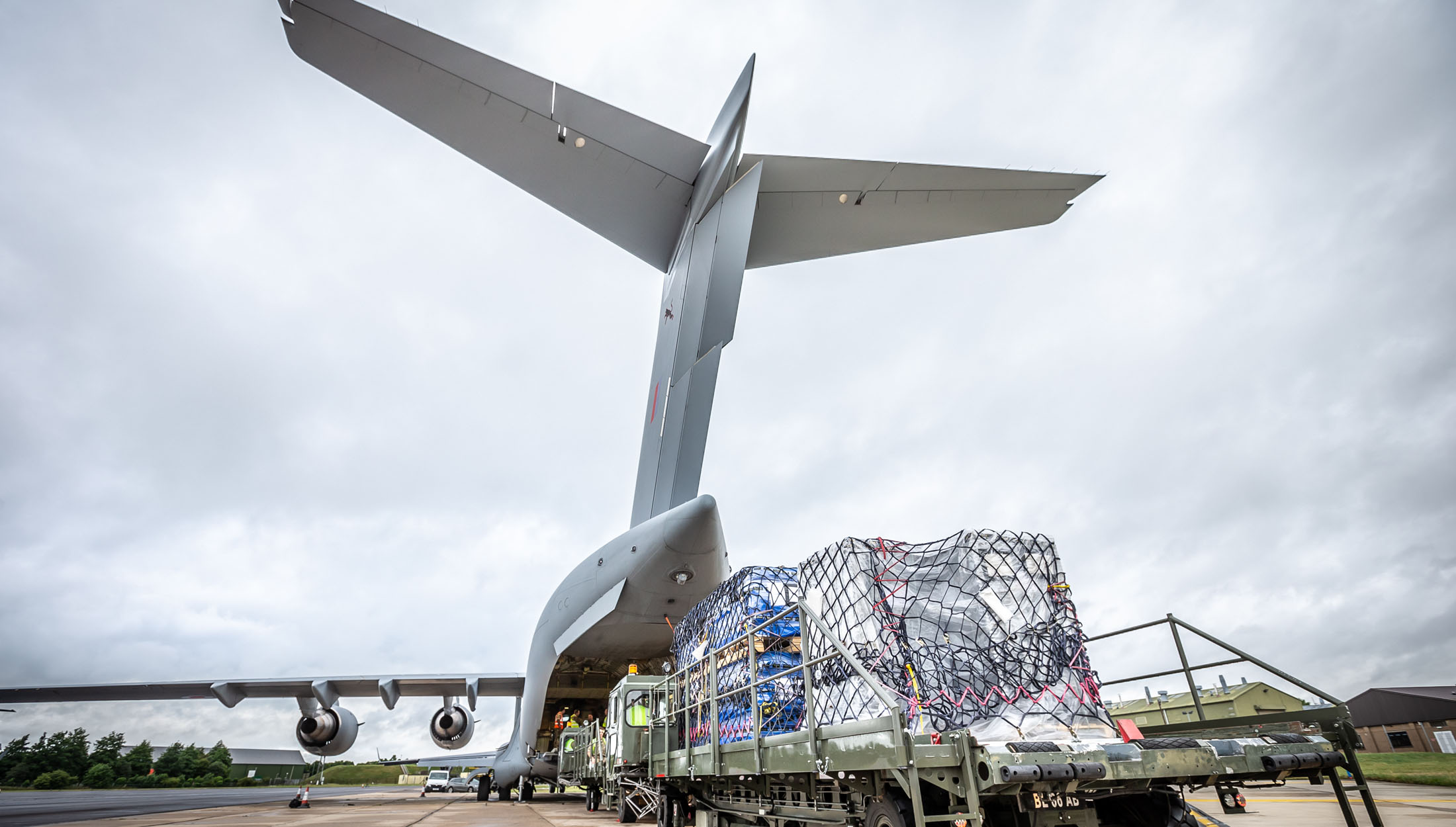 A UK Royal Air Force (RAF) C-17 cargo aircraft was tasked to take materials for the construction of a field hospital, to Accra, Ghana, on Saturday 27 June, to help medical workers there in the fight against coronavirus.

The tasking resulted from a request by the United Nations (UN) to NATO’s Euro-Atlantic Disaster Response Coordination Centre (EADRCC). The disruption of commercial flights and the escalation of freight costs meant that a NATO flight was a good option.

“Last month, NATO agreed to support the UN’s global call for airlift assistance. I warmly welcome that the United Kingdom is the first NATO Ally to come forward with an aid flight, delivering supplies to build a field hospital in Ghana. This is a concrete demonstration of solidarity in action – NATO Allies stepping up to save lives,” said NATO Secretary General Jens Stoltenberg.

This is the first of five planned RAF flights that will transport supplies for the construction of a UK aid funded field hospital on behalf of the World Food Programme (WFP), which is handling infrastructure and logistics on behalf of the UN. The field hospital weighs approximately 130 tonnes and will have the capacity to care for up to 92 people.

“Currently, in the Indo-Pacific, that foundation of deterrence is crumbling as an increasingly aggressive China continues its comprehensive military modernisation,” stated the United States Armed Services committee in a statement entitled The Pacific Deterrence Initiative – Peace Through Strength in the Indo-Pacific.

The Committee warned that China’s modernisation of its military was steadily eroding US military superiority. “The best way to protect US security and prosperity in Asia is to maintain a credible balance of military power. But America’s ability to do so is at risk. And it’s not just US interests at stake. Allies and partners in the Indo-Pacific are watching closely, and wondering whether they will be able to count on America.”

The bipartisan National Defense Strategy Commission report called for the establishment of a Pacific Deterrence Initiative in the National Defense Authorization Act for Fiscal Year 2021. “The Pacific Deterrence Initiative will enhance budgetary transparency and oversight, and focus resources on key military capabilities to deter China,” the report revealed.

There are four pillars on which this initiative is to be built:

US AIR FORCE
L3 Technologies has been awarded a $900 million IDIQ contract for simulator common architecture requirements and standards (SCARS). This contract provides for the definition, design, delivery, deployment and sustainment of a simulator common architecture across the Air Force’s training portfolio, along with the creation of a security operations centre and library and the execution of SCARS management services. The SCARS initiative will also incrementally implement a modular open systems approach, as well as a set of common standards for Air Force simulators. The Air Force Life Cycle Management Center is the contracting activity.

GM Defense was awarded a $214 million contract for acquisition of the Infantry Squad Vehicle, installation kits, ancillary hardware and logistical support. US Army Contracting Command is the contracting activity.

US NAVY
Bath Iron Works has been awarded a $132 million modification contract to fund capital expenditure projects for shipbuilder and supplier industrial base efforts in support of the USS Arleigh Burke DDG-51 class destroyer programme. This modification will fund shipbuilder and supplier base efforts to address supply chain fragility and to ensure future readiness for the fleet. The Naval Sea Systems Command is the contracting activity.

US ARMY
Boeing was awarded a $439 million modification contract for new-build Apache AH-64E aircraft and Longbow crew trainers. US Army Contracting Command is the contracting activity.

BAE Systems has been awarded a $266 million modification contract for Bradley A4 Production Option Two, which awards 159 vehicles. US Army Contracting Command is the contracting activity.

US NAVY
Northrop Grumman Systems has been awarded a $333 million modification contract which exercises options for the production and delivery of three low-rate initial production MQ-4C Triton unmanned aircraft, two main operating bases and one forward operating base in an integrated functional capability-four and multiple-intelligence configuration, with associated export compliance support for the government of Australia. The Naval Air Systems Command is the contracting activity.