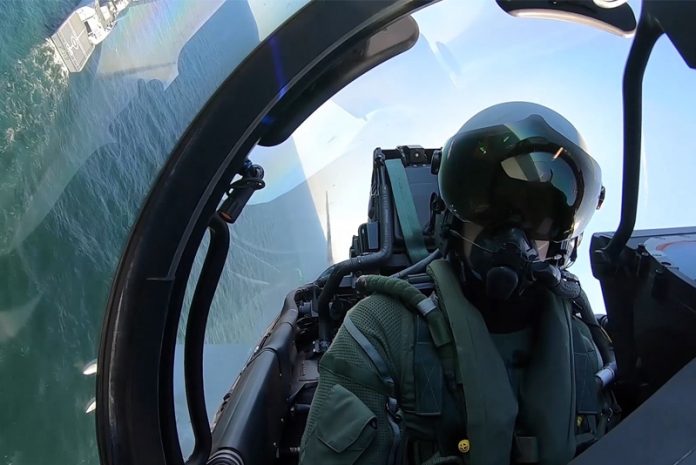 Eurofighter Typhoons from the UK Royal Air Force deployed in Lithuania have carried out mock air attacks to test the defences of NATO warships operating in the Baltic Sea.

The RAF Typhoons from 6 Sqn are currently based at Šiauliai Air Base in Lithuania, with 135 Expeditionary Air Wing, to primarily conduct the NATO Air Policing mission. In addition to this mission however the RAF are also conducting training activities and exercises with other NATO Allies and regional partners.

The Air Maritime training exercise saw the Eurofighters being used to test the air defences of the Standing NATO Maritime Group 1 Task Force, commanded by Commodore Yngve Skoglund of the Royal Norwegian Navy in his flagship HNoMS Otto Sverdrup. The NATO ships were subjected to simulated air attack from high-performance fighter aircraft and air-launched anti-ship missiles.

One of the RAF Eurofighter Typhoon Pilots said: “We are able to provide a realistic simulation of some of the most dynamic threats that NATO warships can face. This valuable training allows them to test every layer of their defences, whether it’s their advanced surface-to-air weaponry or the more traditional upper deck gun crews and that’s extremely rewarding.”

The RAF Eurofighter Typhoons had an unusual advantage as the pilot leading the planning for the exercise is a Royal Navy Officer on exchange with the RAF. Having trained as a Warfare Officer before becoming a fast-jet pilot, his previous experience means he understands the challenges of both the air and maritime elements of the exercise.

He said: “Flying at low-level over the sea is a complex and dangerous environment. If you lose concentration, even for a moment, the results can be catastrophic, let alone when you’re performing aggressive and dynamic manoeuvres.”

He added: “Having experienced this from the other side I can appreciate the workload the ship’s company were under.  Watching them manoeuvre on the attack runs was an incredible sight and certainly isn’t something you get to see every day.”

135 EAW will be supporting wider NATO training activities alongside their Baltic Air Policing mission. During the tour the Typhoon pilots will be conducting Air Defence, Close Air Support and Air Combat training with NATO partners, this ensures all RAF personnel maintain their own skill levels and demonstrates the UK’s leading role in NATO and within the region.