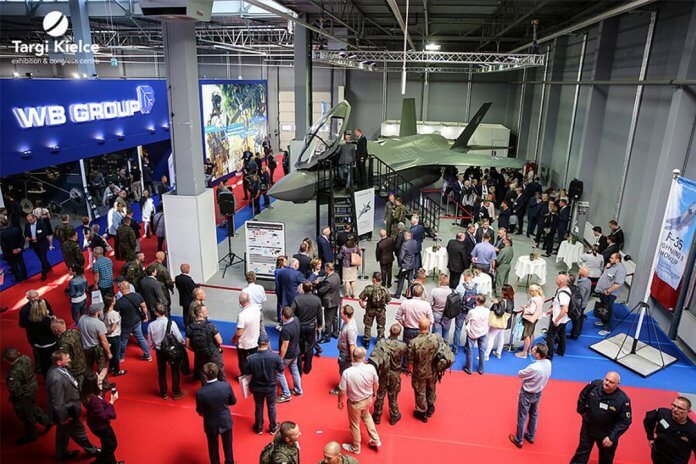 All eyes on Targi Kielce in September – not only the military business sector but the broadly defined industry is focused on the Kielce events.

There are two reasons why this year has been so exceptional. First of all, it has been the Kielce autumn tradition to offers the world’s biggest military concerns’ the presentation platform for their visions of a modern army. The second aspect is related to the COVID-spurred exhibition industry hibernation. The Targi Kielce president’s and employees’ determination has made it possible to overcome the stand-still and start getting back on track.

The expo was organised with strict observance of sanitary rules and regulations and brought together 185 companies from 15 countries. 2020 MSPO was the showcase for the elite of rocket weapons manufacturers – from US Raytheon and Lockheed Martin to the British MBDA European Missile House. The three days’ exhibition attracted several thousand visitors. HE Jeremy Quin, the UK Minister for Defence Procurement, UK, the head of the British delegation and MSPO 2020 Lead Nation Exhibition best recapitulated the trade show. This is how he referred to the expo facts and figures in his speech at the commencement ceremony: “Can I say what a real privilege is speaking today.   In the UK, we are always impressed by the resilience and the determination of the Polish people.   Examples of that resilience and determination occur again and again in the long history of the nation.   It is, therefore, no surprise, even with all the challenges that the world is currently facing, Poland has laid on a first-rate trade show today.   We may be lower on a number we would normally expect, but looking around the halls earlier today, and peering through the lights at all of you in the seats – we may be lower on numbers; we are certainly high on quality.”

The International Defence Industry Exhibition’s expo stand of the Polish Armaments Group was the stage for the official agreement signing between Huta Stalowa Wola [Steelworks] SA and the Czech company Tatra Export. The contract stipulates the design and delivery of a 4×4 vehicle with complete technical documentation which makes it possible to produce the vehicle in Poland. The agreement concerns the 4×4 vehicle version. This vehicle will be offered for the Polish Armed Forces’ programs and projects the Polish Armaments Group is a part of. Ultimately, the vehicle has been acquired to expand the range of chassis for command vehicles and other specialised bodies requiring the use of an advanced 4×4 chassis such as the Rocket and Artillery Forces.

For years, the International Defence Industry Exhibition has been the display for military equipment first and foremost. However, other uniformed services’ have always been offered cutting-edge solutions. This year’s expo welcomed those who make their début.   The XXVIII International Defence Industry Exhibition has differed from the previous years’ trade shows. Yet the equipment suppliers did not disappoint the expo visitors who admired cutting-edge weaponry, helicopters and armaments which enhance the uniformed services’ capabilities. The General Jakub Jasiński Training Centre presented the Anti-Tank Mine Control System for the Engineering and Chemical Forces. “Jarzębiona” is the product’s codename – the system consists of 21 anti-tank mines with an EFP charge and offers 100 meters operating range. The new Ford Ranger XLT, adapted to the military needs also has made its début at the trade show. The cars are produced in South Africa, now they have undergone a complete modernisation – their tyres tires have been enhanced, they have also been equipped with an engine and the added rear-body section especially for the use of uniformed services. The car has been assigned tasks from those of the Honker, heavily used by the military. MSPO was the display for the Leopard 2A4 tank, the one whose construction has been re-designed. The three modernisation areas included improvement of ballistic protection, fire efficiency and functionality enhancement.   The ballistic protection strengthening comprises the installation of additional turret armour, replacement of ceramic inserts in the actual armour. The efficiency improvement consists mainly in the weaponry modification, the commander’s sight new version and thermal imaging cameras installation, delivered by the Polish company PCO. The functionality has been improved by electric-drives equipped weapons, fire protection system replacement and the new reversing camera. The modernisation scheme has been implemented by the Bumar – Łabędy from Gliwice. Ultimately, all Leopard 2A4 units are to be the subject of refurbishment.

In line with the MSPO tradition – DEFENDERS awards

One of the last highlights of the International Defence Industry Exhibition has been the presentation ceremony of the DEFENDER awards – the distinction is awarded every year by the Kielce defence trade show’s Programme Board. The gala ceremony was also the occasion to present the extraordinary awards of the Polish Army.

Not only is the function the accolades presentation time, but also the recapitulation of this year’s expo As Andrzej Mochoń PhD. emphasised how difficult it is to offer a brief punchline for this year’s event. – It is not easy to provide a quick wrap-up … was it a success or a failure? The same question is on our Exhibitors’ lips when we talk to them. Time will tell how much we gained at this event. However, already today, I can say that it was worth fighting for this year’s only defence industry exhibition in Europe. – said the President of Targi Kielce.

The DEFENDER awards have been bestowed to:

-The Air Force Institute of Technology in Warsaw (the leader); the Central Military Bureau of Design and Technology SA from Warsaw for the e-NOSP network-centric system which uses data teletransmission for readiness management of aircraft ground handling equipment

The Military Institute of Armament Technology from Zielonka (the leader); Autocomp Management LLC from Szczecin for the shooters training autonomous simulator of the PIORUN portable anti-aircraft missile system

“Publish health safety” was this year’s MSPO’s key-word; it was on everybody’s lips. Sebastian Chwałek appreciated the Targi Kielce efforts in this aspect – the Secretary of State in the Ministry of National Defence, Chairman of the Programme Board, personally involved in the organisation MSPO recapitulated the three days’ trade show in his speech at the gala ceremony:

– This is the perfect moment to thank all those who have contributed towards making the September in Kielce meeting possible, the fact that despite the current epidemic state. We have been able to cultivate the many years’ traditions tradition and discuss safety, security, defence and weaponry. Special thanks go to the Expo organisers and hosts – Mr Andrzej Mochoń, CEO and all Targi Kielce employees, as well as to municipal and local authorities. Thank you for making it possible for us to participate in this unique event, thanks for your hospitality and security measures in place. The precautions were ubiquitous.

The Świętokrzyskie region MP’s, representatives of the government and city authorities have been involved in the endeavour, which made it possible to organise this year’s trade show.