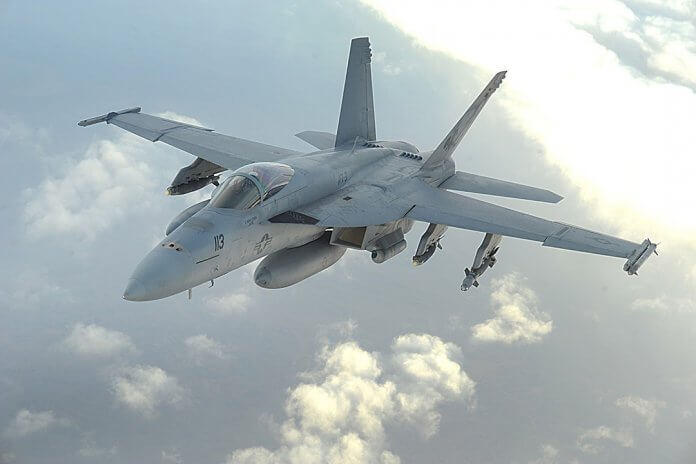 An accurate, timely electronic order-of-battle detailing the identity of hostile ground-based air surveillance and fire control/ground-controlled interception radars is to the Offensive Counter Air (OCA) battle what Mozzarella cheese and tomato is to pizza. Quite simply the success of Suppression of Enemy Air Defence (SEAD) efforts, a key element of the Offensive Counter-Air battle, is dependent on the SEAD force possessing the most accurate Electronic Intelligence (ELINT) possible. This not only helps the SEAD force ascertain where to direct its kinetic and electronic effects against such targets, but also allows other aircraft to plan their sorties in such a way as to avoid, or reduce, the chance of detection by these radars.

Link-16 remains the standard track and tactical information Tactical Data Link (TDL) used by the North Atlantic Treaty Organisation (NATO) and allied nations during air operations. Few would argue with Link-16’s positive influence on air operations. One paper it can support data rates of up to one megabit-per-second, although in practice, data rates tend to be noticeably lower across the 960 megahertz/MHz to 1.215 gigahertz/GHz frequencies it uses, typically hovering around the 115 kilobits-per-second/kbps mark.

The TDL can handle tactical traffic concerning Electronic Warfare (EW), typically the J14 and J14.0 series messages it handles which relate to emitter parametric information and EW control coordination respectively. Parametric information relates to the characteristics of radar emissions in the locale of the operation. Analysing this information will often help to betray the identity of those radars. Once this is known, it is possible to decide which countermeasures will be most effective in neutralising them.

As the TDL is not designed exclusively to handle EW information, with just two albeit important categories of electronic warfare data handled by Link-16, another means of handling EW information in the air environment has emerged known as CESMO (Cooperative ESM Operations). NATO’s CESMO initiative performs an elegantly simple function: It detects and locates electromagnetic threats, notably radar, by gathering ELINT collected by several disparate aircraft and federating this to provide an accurate picture of where hostile radars maybe located at any particular time.

Radars are located using two methods; Angle-Of-Arrival (AOA) and Time of Arrival (TOA). AOA determines the Line-of-Bearing (LOB) from on point to another, in this case an aircraft and a hostile radar. Imagine that three aircraft are flying in the vicinity of a ground-based air surveillance radar. One aircraft is flying towards the radar on a north-south bearing. The second is flying on an east-west radial away from it. The third is flying on a south-north bearing towards the radar. Each aircraft is equipped with a Radar Warning Receiver (RWR). The RWR will detect and identify a radar transmission and determine its LOB relative to the aircraft. All three of our aircraft detect the same radar transmission. The RWR on the first aircraft determines a southern LOB to the radar. The RWR on the second determines a westerly LOB to the radar while the RWR on the third aircraft determines a northerly LOB. By using this information, it is possible to determine the radar’s position as the point where all three of these bearings meet. CESMO will compute this point using the ELINT derived from these aircraft’s RWRs, and fusing this with the aircraft’s positions as derived from their transmitted GNSS (Global Navigation Satellite System) coordinates to determine the radar’s location.

The presence of noise in the electromagnetic spectrum and the possibility of RF error propagation will mean that the AOA approach will present the location of the hostile emitter as an ellipse around a central point rather than an ‘x marks the spot’ location. The more measurements that can be obtained vis-à-vis this radar from more platforms the better the location accuracy of the radar becomes. Once a radar is located it can be avoided with aircraft flying outside its detection range. Alternatively, the radar can be engaged kinetically or electronically as part of the SEAD fight. The cool thing about CESMO is that it can employ ELINT sent from the standard RWRs used by combat aircraft for self-protection and from warships equipped with Electronic Support Measures (ESMs) which maybe supporting the operation.

At the tactical level, an ESM or RWR will detect a hostile emitter. This information will flow to the Electronic Warfare Coordination Centre (EWOC) supporting a specific air operation which will usually comprise part of the CAOC (Combined Air Operations Centre). At the EWOC the ELINT sent by these platforms will be analysed and the radar’s parameters analysed. As Jonathan Burton, a specialist engineer at 3SDL notes: “This information would then be transmitted back out on the CESMO network as well as provided to the headquarters to support situational awareness.” 3SDL is heavily involved in the CESMO initiative,  providing consultancy and software support to the UK’s Defence Science and Technology Laboratory which is playing a leading role in the realisation of the overall CESMO concept including the CESMO Hub software which implements NATO’s Standardisation Agreement 4658 (STANAG-4658). STANAG-4658 governs the CESMO specifications. Within NATO, CESMO is the responsibility of the alliance’s Signals Intelligence and Electronic Warfare Working Group. It has been under development since 1995. 3SDL is offering the CESMO Hub as an operational product, Mr. Burton continues. As well as collecting ELINT, CESMO can be used to hoover up Communications Intelligence (COMINT) regarding hostile radios and communications networks.

CESMO uses IP (Internet Protocol) messaging to share SIGINT. For all intents and purposes, CESMO is a message standard used to convey the information discussed above, says Mr. Burton: “CESMO is designed to be bearer agnostic. As such it can use any bearer that supports an IP network,” he notes. These IP messages can occupy under 16kbps of bandwidth and sent across existing communications protocols. Furthermore, CESMO is a node-less network as there is no single, central point of control. Should one platform sharing SIGINT be lost, this will not cause the loss of the network. Neither does CESMO handle ELINT in a single direction. As well as sharing SIGINT with the network, platforms can receive timely intelligence in their cockpits giving them an instant view of the location and behaviour of a hostile radar. Mr. Burton continues that the CESMO messaging standard is now in service with several NATO nations. The technology’s application is not limited to air platforms: The bearer agnostic nature of the network means that any platform with a radio capable of handling IP data could share and receive CESMO information: “CESMO is designed to support integration into air, land and maritime platforms. A CESMO operation can be conducted with platforms from any and all domains so there is great flexibility to support any individual mission.”

CESMO has dual benefits in that it can enhance operational and tactical ELINT, while also enhancing ELINT at the strategic level. The alliance uses the NEDB (NATO Emitter Database) as the repository of electronic intelligence which is stored and shared amongst its membership. The NEDB has been in use since the early 1990s as a means by which member nations can share ELINT.

For example, the L3Harris ES-3701 ESM equipping a ‘Iver Huitfeldt’ class frigate of the Søværnet (Royal Danish Navy) may discover a new radar waveform during a routine patrol. This intelligence maybe analysed by the ES-3701 or by ELINT analysts back at base after the mission if the detected emissions fall outside the ESM’s threat library. Once analysed, the transmission’s details and characteristics can be sent to the NEDB. Alliance members can view this information and load these parameters into their own ESMs and RWR threat libraries so that similar transmissions can be recognised and recorded in the future. CESMO represents an important milestone in the reinforcement of the alliance’s overall electromagnetic situational awareness, and that of its member nations.