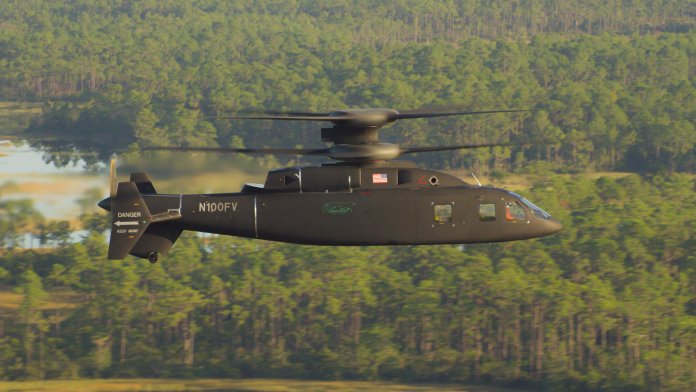 AUSA, Washington DC: The sensation of flying the Sikorsky-Boeing SB>1 Defiant rotorcraft “is more like a tactical jet than a helicopter,” said Sikorsky test pilot Bill Fell, speaking at a joint Sikorsky-Boeing briefing on the second day of AUSA.

Fell was discussing his personal experiences as a SB1.Defiant test pilot, an aircraft that has been positioned to contest the US Army’s Future Long Range Assault Aircraft (FLRAA) requirement. “The rigid rotor allows for much faster control response,” he said. “It is also a fly by wire aircraft so we can tune it with the flight controls and make it aggressive if flying low to manoeuvre through trees and to avoid enemy contact, or de-tune it if flying in the clouds when conducting an instrument mission.”

“The control response adds a great deal to the pilot’s ability to manoeuvre low level, especially in a near-peer environment,” he added. “You can hug the terrain but go faster than a regular helicopter, using speed and agility to avoid enemy contact.”

“The rotor gives you a certain amount of acceleration, then add the pusher prop which now gives the best of both worlds. The pusher prop also provides phenomenal deceleration into the landing zone as it has a pitch range that includes both positive and negative cruise capability.”

Fall said that when flying at over 200 knots, to decelerate “you put negative pitch on the pusher prop and then feel it tug on your shoulder straps telling you are stopping rapidly. Defiant lets you ‘throw a parachute out’ during the approach allowing you to manoeuvre much steeper and closer into a landing zone in ways you could not do in a helicopter….You can even stop a little bit nose down to give you a better vantage point.”

In terms of control, Fell explained that the roller on collective can be moved forward for more thrust and back for less – then add thrust from the rotor depending on the mission.”

In terms of an actual mission, it is not only the X2 technology but the fly by wire which gives the ability to programme in an automatic landing using the sensors, maybe through a flight control system. “It can really reduce the workload and let pilots concentrate on flying the actual mission effectively.”