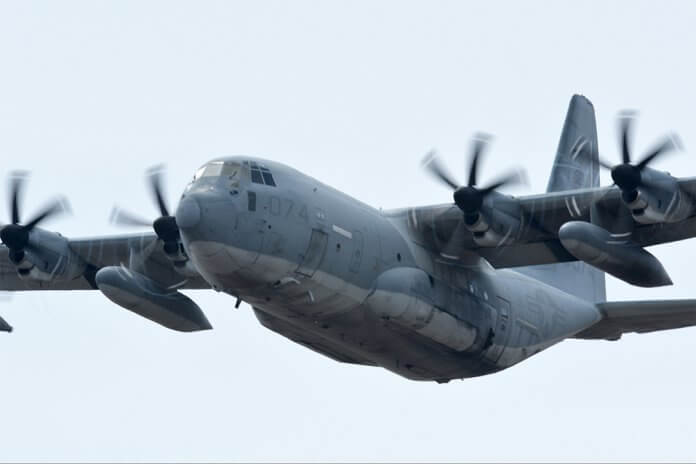 Marshall Aerospace and Defence Group (MADG) has won a ten-year multi-million dollar contract with the US Marine Corps to provide depot-level maintenance to its 66-strong fleet of KC-130J tanker aircraft deployed worldwide.

The contract, one of the biggest in the company’s history, enables MADG to perform scheduled and unscheduled maintenance, repair and overhaul (MRO) services in support of Naval Air Systems Command’s Tactical Airlift Program Office (PMA-207).

MADG Chief Executive, Gary Moynehan, comments: “This really is fantastic news that represents a very significant step forward in our strategy to grow our share of business in North America. This win builds on more than 50 years of service to the Royal Air Force which has, and continues to be, the bedrock of our Military Aerospace business. I am very proud that the US Marine Corps is prepared to place its trust in a privately-owned British company to undertake this important work.

“We are already working closely with the US Government and the US Department of the Navy through NAVAIR. We initially won the support contract in 2019 for three Kuwaiti KC-130Js purchased through the US Government’s Foreign Military Sales process and, more recently, supported the entry into service of the iconic ‘Fat Albert’ replacement for the Blue Angels Flight Demonstration Squadron.

“Our ability to secure this framework contract with the US Navy is a further strengthening of our relationship with this important customer, the world’s second largest operator of C-130 aircraft, validating MADG’s position as one of the most capable, experienced and competitive C-130 support organisations in the world. We thank both NAVSUP and the Fleet Readiness Center Western Pacific for the trust they have shown in our aircraft support capabilities.

“MADG is one of just two suppliers to have been awarded a framework contract and as such it has huge potential for the long-term future of our business. Whilst the volume of work we secure will ultimately be dependent on our ongoing performance I am very confident that we will begin to demonstrate our ability to deliver a world-class, cost effective service when the first aircraft arrives Cambridge later this year.”

As CAPT Matthew Brickhaus, NAVSUP FLC Yokosuka Director of Contracting explains: “This innovative contracting strategy led by our team will enhance global commercial repair capacity and redundancy for the naval aviation enterprise. Simply put, there is now more than one overseas commercial contractor ready to service the depot repair needs of the C-130 fleet.”

Fleet Readiness Center Western Pacific Commanding Officer, CDR Randy Berti comments: “Our mission is to provide safe, mission-ready aircraft to our U.S. Navy and Marine Corps customers. Teaming up with Marshall Aerospace and Defence Group will help us to accomplish our mission and accelerate naval aviation readiness with world-class execution.”