Extending visual capabilities through the use of night or thermal vision devises, or even using micro-UAS to see ‘over the hill’ can help soldiers retain their combat initiative.

Knowing your surroundings has always been a critical concern and objective in combat from the highest command to the individual rifleman. Having sound information about the terrain, enemy and overall conditions offers a huge advantage. At the small combat unit level this knowledge can not only make the difference between success or failure of a mission but between life and death. Detecting an opponent first provides an immediate advantage through the ability to take the initiative in terms of ‘what happens next.’ Similarly for one initially taken by surprise the best chance of ‘turning the tables’ is to regain the initiative by applying fires and movement both of which are predicated on quickly and accurately establishing the situation and responding to it.

Although detecting and engaging an opponent is important for the frontline soldier it is not the only element of his achieving good situational awareness. The task of simply maintaining his orientation both to the ground and to his squad members is vital. Becoming lost or disoriented can have equally deadly consequences. Not knowing where fellow soldiers are can lead to friendly fire incidents. While serious in daylight, this become even more complicated at night.

Night vision devices, though technology and production advances, are now widely available to the infantryman. In addition miniaturisation, inexpensive digital memory and processing, and wireless networking has meant that information and imagery can be presented, integrated and transmitted much more readily. Together these advances are opening more possibilities to significantly improve the situational awareness of the soldier and small unit.

Image intensification (I²) has become significantly less expensive, more compact, and more efficient. The majority of devices such as night vision goggles (NVGs) use tubes that amplify the light.

The range of I² devices now includes weapon mounted sights as well as NVGs and every modern combat helmet now includes a NVG mount. The preferred NVG configuration for the infantryman appears to be moving toward a single tube which places the I² image in front of one eye with the other left with normal eyesight. A drawback of the NVG is that it typically prevents normal sighting of the rifle. To provide for this weapons are outfitted with a laser spotter that is alighted with the weapon. The spot can be viewed by the NVG and when placed on to the target and the trigger is pulled the shot should hit. This provides effective and more rapid engagement particularly at combat ranges though it becomes less accurate as the range increases.

The I² and NVG are widely available both commercially and with militaries worldwide so ‘owning the night’ has become much more difficult and less assured.

TI essentially detects the temperature differences between objects, with warmer objects standing out from colder ones with each having a different signature depending on many conditions and circumstances. TI does not rely on any external light sources and is able to detect through foliage, smoke, and even inside buildings. A major advantage of thermal imagers is that they are digital which allows their information to be readily processed, transmitted and integrated. TI devices are generally larger in size with the majority being either handheld or weapon mounted.

Since thermal uses a digital medium it is possible to display imagery not only looking into the device but also to have it remotely displayed. This offers the possibility of presenting the image into a helmet mounted display worn by a soldier, allowing them to see exactly what the weapon is pointing at without having to face in the same direction. This literally allows shooting around corners. The soldier can point his weapon around the wall or corner, see what is there and chose to engage it without exposing himself.

One of the earliest systems to demonstrate this capability was included in the FÉLIN (Fantassin à Équipement et Liaisons Intégrés, Integrated Infantryman Equipment and Communications) fielded by French infantry and developed by Safran Electronics & Defence. It linked the thermal sight on the FAMAs rifle via cable to a helmet mounted optical device. Units were provided to French soldiers in Afghanistan in 2011. Field results were mixed; although the capabilities were welcome the overall weight of the weapon/sight combination was considered a drawback. This highlights a recurring concern common with many of the efforts to expand the horizons of the individual combat soldier. Often these systems have weight, bulk, complexity, power demands, and other design aspects that are found to be impractical in real world combat environments. This has even been the case where the concept and even the hardware has been “field” evaluated. It suggests at least the difficultly in truly reflecting the conditions of prolonged combat in test and evaluation, but also the enthusiasm of soldiers asked to conduct such evaluations. 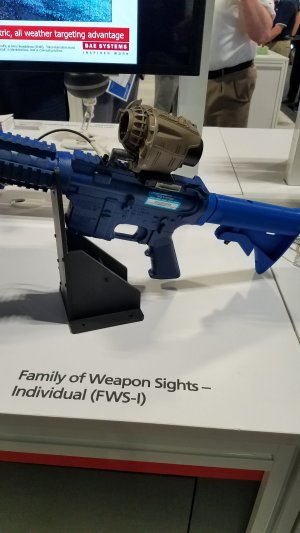 The US Army Family of Weapon Sights (FWS) development is bringing the rifle/weapon mounted sight to a new level of compactness and integration. The FWS-I (Individual) wirelessly transmits the weapon sight crosshair and thermal imagery to the Enhanced Night Vision Goggle (ENVG) III and ENVG-Binocular, providing a Rapid Target Acquisition (RTA) capability. The Army sees RTA as “providing a new level of tactical capability in that it enables soldiers to detect, recognise and engage targets accurately from any carry position.” Two companies have systems selected Leonardo DRS and BAE Systems with the first production contract having been awarded to BAE in March 2018 for both the ENVG and FWS-I.

While TI is exceptional for detecting a target, its recognition and identification capability has been limited, in terms of whether the target is friend or foe or a combatant or non-combatant. For this, the visual optic remains preferable. One solution is to incorporate both thermal and visual into a single mounted system. Safran’s SWORD T&D does just this. It combines an uncooled thermal and day weapon optic. The new generation, digital sight improves direct or offset shooting and observation. Options include remote hands on weapon control and communication links for data and video. It is compatible with not only rifles but machine guns and infantry support weapons such as the Saab Carl Gustav recoilless rifle.

A key piece of providing the infantryman significantly greater situational awareness is to ensure other senses are not compromised. This was felt to be a limitation in infantry use of a dual-optic NVG. By wearing it the soldier completely lost use of their normal vision. Many view the small helmet mounted display as the preferred solution. The MV35XC from Collins Aerospace offers remote viewing of any composite and RGB device. With it the wearer not only has instant access to video sights but can also selective view computers, maps, GPS and other data.  The display is small allowing the wearer to remain aware of his surrounding while it can also be pushed up or aside to allow completely unobstructed vision or use of a weapon sight.

Little eye in the sky

A new frontier for the infantry squad has been via the introduction of unmanned aerial systems small enough to place in the palm of the hand. These micro-UAS have the potential of extending the situational awareness of this smallest dismounted combat unit far beyond what has been previously possible. They are compact and light enough to be carried by a soldier, built simple to use by incorporating autonomous control, and able to fly for moderate periods to provide real-time video of close-by areas of interest. One of the earliest is the Black Hornet from FLIR Systems. This ‘nano’ UAS is in use with armed forces of the United States, France, the United Kingdom, Germany, Australia, Norway, the Netherlands and India. It is also called a Personal Reconnaissance System (PRS), each of which incorporates two Black Hornets, a docking/charging station (they are battery powered), a hand-held touch screen controller and display. Each weighs less 45 grams (0.1lb) and is under 178mm (7in)  long. Each Black Hornet can stay airborne for 25 minutes and has a line-of-sight radio-link range of around 2,000m.  Each unit has two daytime video cameras and a thermal imager and has the capability to fuse the three feeds for higher fidelity imagery. The operator can pilot the drone manually or use semi-autonomous operation following pre-programmed GPS waypoints and return as programmed or on demand. If the command signal is lost Black Hornet will automatically return to its origin.

These nano or micro UAS offer realisation of the ultimate wish of the combat soldier – to see over the next hill, tree-line, or city block. By being present and specifically configured to the small unit they provide the local information so critical to their gaining the advantage over an opponent.