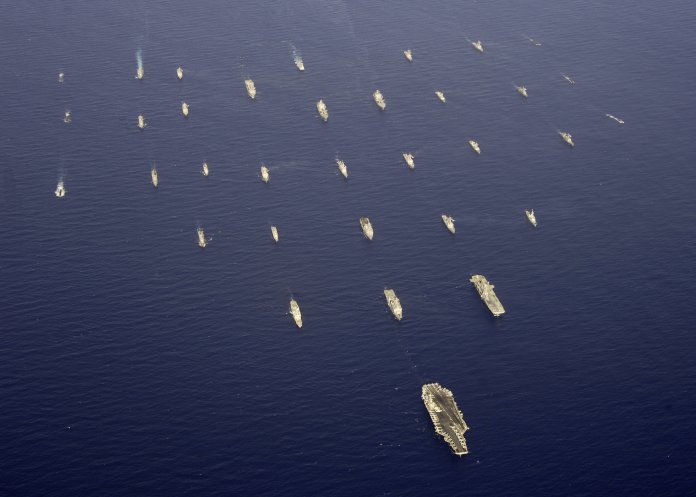 Apologies that this is coming to you a day late. Lots of conferences attended in the last few weeks, especially on space defence (see my feature in Armada International magazine No. 6 Dec20/Jan21).

What is certain is that there is a shift in requirements of military personnel from ‘brawn to brains’ – even though we will still need regular soldiers, sailors and airmen doing their daily tasks for some time to come.

Higher levels of technology will demand keen minds to understand and digitally deploy big data, artificial intelligence, and information gathering (ISR) systems to collect, analyse, disseminate and prosecute this knowledge for the users who needs it most (real time).

Military budgets post COVID will not be able to afford large numbers of highly qualified and skilled experts, which will serve to bring the defence and civil sectors closer in both the design and implementation of digital backbones which will manage the employment and operational requirements of technology driven forces around the world.

On 10 December the Department of Defense (DoD) released its Annual 30 Year Shipbuilding Plan which had as its focus the maintenance of maritime superiority through a fleet of both manned and increasingly unmanned ships.

Areas of focus for financial investment will include “submarine construction, modernising aircraft, extending the service life of cruisers and increasing the number of destroyers,” stated David L. Norquist, deputy secretary of Defense.

According to the DoD, “the plan is based on the classified Future Naval Force Structure study presented to Congress” in early December. Norquist added that the study “looked at three different fleets that would be required in fiscal 2045. The Navy calls it ‘Battle Force 2045’.”

The figures reveal an ambition of 355 ships by 2030, with a ‘huge growth’ in unmanned surface and sub-surface vessels. Key comparisons focusing on some of the growth areas below are from the Report to Congress on the Annual Long-Range Plan for Construction of Naval Vessels, 9 December 2020.

Amphibious Warfare Ships
The USMC is reducing a number of legacy systems to reinvest in development of
more NDS-relevant capabilities such as Marine Littoral Regiments (MLRs). The FNFS
highlights the important contributions MLRs provide to Sea Denial and Sea
Control missions. This approach requires a new mix of amphibious warships
including the Light Amphibious Warship (LAW), which is critical to MLR
mobility and sustainability. The overall number of amphibious warships grows to
support the more distributed expeditionary force design, with an increased
number of LAW complementing fewer legacy amphibious warships. The impending no-deal in the Brexit negotiations between Britain and the European Community has had at least one galvanising effect on the British government – a call to ‘ready the gunboats’!

The media outburst that four patrol boats were being readied to protect the UK’s sovereign fishing groups rekindles memories in people of a certain age of of the Cod Wars between the United Kingdom and Iceland in the mid-1970s. The third which took place between November 1975 and June 1976 witnessed fishing nets being cut, the deployment over the period of 22 Royal Navy (RN) frigates during the period and at least 55 rammings at sea, sometimes between naval vessels of the two NATO states. Iceland also ended diplomatic relations with the UK. To envisage any clashes at sea between the RN and any European fishing boats or naval vessels is not one either side would wish to contemplate. However, French fishing boat captains have already exhibited their intent to attack British boats in arguments over scallop fishing earlier this year and in 2018.

The RN has eight River Class patrol boats designed for this kind of maritime security role, although some are deployed around British Overseas Territories. Several of these boats have already been enforcing British and European fisheries law.

AUSTRALIA’S ‘TAPE’ IS RED TOO

“We need to ensure we have a fit-for-purpose contracting system in place and the review into the Australian Standard for Defence Contracting (ASDEFCON) templates and Defence procurement processes will seek to improve this,” announced Francesca Rush, assistant secretary-general counsel – Commercial, Australia Department of Defence.

Addressing this seemingly endless problem is a facet of defence procurement globally as requirements and measuring parameters change, and the cycle of new technology insertion continually shortens.

“With a $270 billion [US$203 billion] investment in Defence capabilities rolling out over the next decade, we need to ensure we are balancing the needs of the Australian Defence Force with what defence industry can deliver,” continued Rush.

“The review is intended to build processes that reduce red tape and create a system that strengthens the way Defence approaches its engagement with defence industry,” Rush said.

Israeli manufacturers seem to have improved on this dilemma by having employees continually serving in the Israeli Defence Force (IDF), then coming back out into industry, creating constant feedback about what works and what does not and how technology can be implemented.

The review is expected to be finalised by mid-2021.

7 December, 2020 – Taiwan. The State Department has approved a possible Foreign Military Sale to the Taipei Economic and Cultural Representative Office in the United States (TECRO) of a Field Information Communications System (FICS) and related equipment for an estimated cost of $280 million..

US NAVY
Boeing is awarded a $109 million order to procure P-8A training systems for the government of New Zealand. This order procures one Operational Flight Trainer (OFT) with one OFT Brief/Debrief Station (BDS); one Weapons Tactics Trainers (WTTs) with one WTT BDS; one 10-seat flight management systems trainer electronic classroom; one 10-seat mission systems desktop trainer electronic classroom; one training system support center; one scenario generation station; one virtual maintenance trainer; one maintenance support cabinet; and one 10-seat maintenance electronic classroom. Additionally, this order provides for software, books and other publications, contracts, logistics, engineering and management technical assistance required for the development, production, test and in-country delivery, installation and inspection of the training systems. Foreign Military Sales funds in the amount of $109 million will be obligated on this award. The Naval Air Warfare Center is the contracting activity.

US Army
Textron Aviation was awarded an $11 million contract for a King Air 250 aircraft. Fiscal 2021 Foreign Military Sales (Panama) funds in the amount of $11 million were obligated at the time of the award. The US Army Contracting Command is the contracting activity.

10 December
US NAVY
BAE Systems Land and Armaments has receive a $184 million modification contract for amphibious combat vehicles (ACV). This modification provides for the procurement of 36 full rate production ACVs and other associated production costs for the Marine Corps. The Marine Corps Systems Command is the contracting activity.

9 December
US ARMY
Sikorsky was awarded a $507 million modification contract for UH-60M HH-60M aircraft. The US Army Contracting Command is the contracting activity.

US NAVY
Bell Boeing Joint Project Office received a $170 million modification contract that adds scope for the production and delivery of one CMV-22B variation in quantity aircraft for the Navy and exercises options for V-22 Common Configuration Readiness and Modernisation (CC-RAM) Lot 4 requirements. Additionally, this modification provides for planned maintenance interval inspections, repairs, shipping and storage containers and tooling in support of the V-22 CC-RAM program. The Naval Air Systems Command is the contracting activity.

Kratos Unmanned Aerial Systems is awarded a $38 million contract modification which exercises an option to procure 48 BQM-177A subsonic aerial targets for the Navy as well as associated technical and administrative data in support of full rate production lot two deliveries. $806,070 of the funds obligated for this effort were Foreign Military Sales funds converted to weapons procurement (Navy) funds for the replacement of one target expended by the government of Australia. The Naval Air Systems Command is the contracting activity.

8 December
US AIR FORCE
Raytheon has been awarded a $13 million modification contract for Qatar Early Warning Radar (QEWR). This modification is for the procurement, manufacture and storage of spares in support of sustainment for the QEWR. This modification involves 100 percent Foreign Military Sales (FMS) to the country of Qatar. The Air Force Life Cycle Management Center, Hanscom Air Force Base is the contracting activity.

US ARMY
L3 Technologies was awarded a $13 million contract for the procurement of binocular night vision devices and accessories. Fiscal 2010 Foreign Military Sales (United Arab Emirates) funds in the amount of $13 million were obligated at the time of the award. The US Army Contracting Command is the contracting activity.

7 November
US ARMY
(Largest of the day). West-MGE JV was awarded a $40 million contract for civil works and hydrology and hydraulics services. The US Army Corps of Engineers is the contracting activity.

PARIS AIR SHOW
21-27 June 2021, Le Bourget, Paris, France.
The event organiser stated: “In light of the uncertainty linked to the current COVID-19 health crisis, the Paris Air Show organisation has made the decision to cancel the 2021 edition of the show. This reasonable decision was agreed upon unanimously by the Paris Air Show Board members in the context of a crisis that has had an unprecedented impact on the aerospace industry.
The next edition of the Paris Air Show will be held in June 2023, at a date that will be announced shortly. Exhibitors will receive a full refund of all sums already paid and the Paris air Show will take full financial responsibility for this decision.