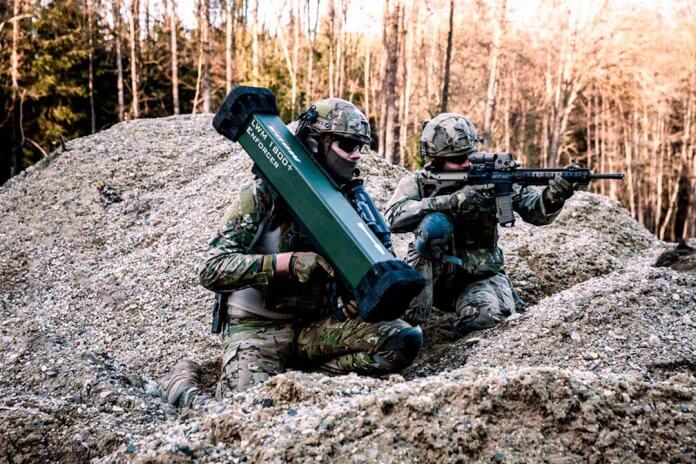 The Enforcer was selected following a competitive selection, the “Leichtes Wirkmittel 1800+”, seeking a lightweight weapon for engaging moving targets at 1800 meters and beyond. This contract addresses the Bundeswehr requirements for a day/night, precision-guided, shoulder-launched weapon system capable of defeating current and future threats at an effective range of 1,800 – 2000 m.

Enforcer incorporates features and performance essential on the battlefield. At 11 kg (24.2 lbs) for the sight and ready to fire missile, it is lightweight which combined with its compact size provide for easy carrying and employment. It consists of a missile in a disposable launch container and reusable day/night sighting system.

Fully “fire-and-forget” it is straight forward to use and precisely accurate against both static and moving targets. The lock-on-before launch feature significantly reduces the exposure of the operator conducting an engagement. Its confined space firing capability allows for use from within a building in urban environments or from a defensive bunker. The multi-effects warhead is effective against armoured and soft skinned targets, as well as having an air burst setting that will address targets behind cover.

The initial 850 Enforcer missiles will be supplied to the Kommando Spezialkräfte (KSK) German Army special operations forces with following deliveries expected for the infantry.