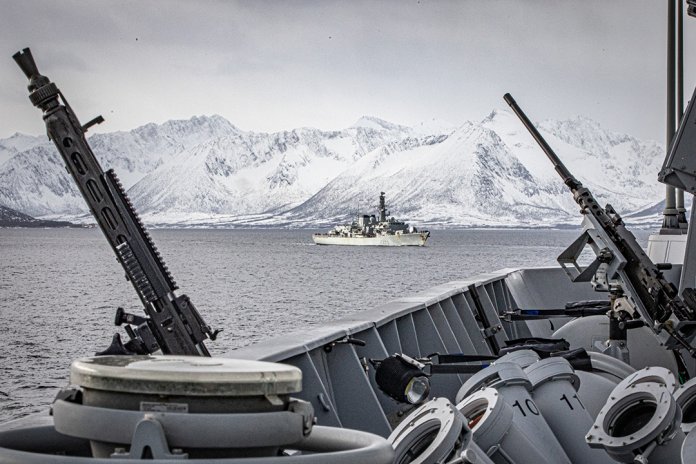 The Norwegian frigate HNoMS Thor Heyerdahl and the British frigate HMS Lancaster have concluded a five-day passing exercise in the North, enhancing allied ability to integrate and safely conduct maritime operations in all domains.

The exercise has included serials in navigation, electronic warfare, communication and warfare in all domains. Two Norwegian F-16 fighter jets from the Norwegian Air Force have also taken part, to give the surface vessels credible and realistic training from the air.

– As two close neighbours and allies we share common interests and security concerns in our area of responsibility. During our recent training, we have enhanced our ability to effectively cooperate and safely conduct maritime operations in all domains. This is enhancing cohesion among allies and our common security in the North, says Commanding officer of HNoMS Thor Heyerdahl, Commander S.G. Lars Larsson.

The Royal Navy is one of Norway’s closest allied navies. The Royal Norwegian Navy takes frequently part in the British led exercise “Joint Warrior”, and uses Royal Navy’s Fleet Operational Sea Training (FOST) to ensure the level of training for their surface combatants. Norway is member of the British-led multinational task force, Joint Expeditionary Force (JEF). JEF is a High-readiness task force prepared to rapidly respond to crisis anywhere in the world.

Virtual is a Virtue

Elbit Systems Awarded $50 Million Contract by the Portuguese MoD to...