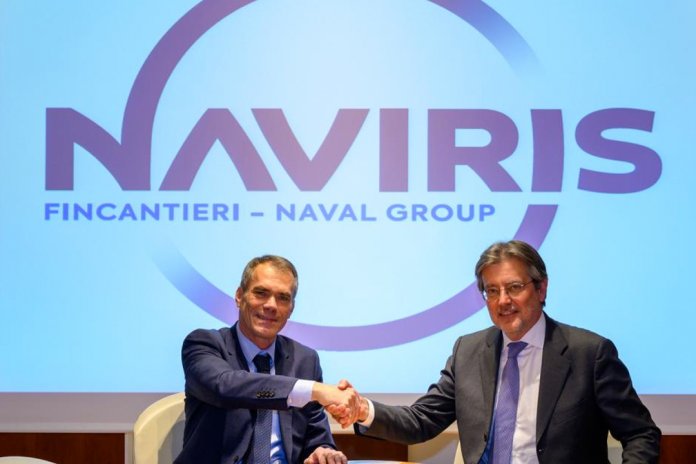 Published in the February/March 2021 Issue – During a pre-Euronaval press conference, on 19 October 2020, Naval Group’s CEO, Eric Pommelet, briefly talked about Naviris, the Joint Venture (JV) between Naval Group and Fincantieri.

Yet, most of the discussion that followed during the Q&A session focused on ongoing and (potential) future procurement programmes. Why was that?

Probably because energy efficiency in the naval domain is far less ‘crowd pleasing’ than, say, naval platforms and weapons procurement programmes. Admittedly, it says little about geopolitical tensions and shifts across the world’s oceans. But also, and perhaps even more importantly, because naval platforms are under no obligation to comply with environmental regulations from the International Maritime Organisation (IMO). They can if they wish to, of course, but there is no obligation so there has been no spotlight on the topic. This is in direct contrast, for example, to the commercial marine sector with the implementation of the sulphur cap in January 2020.

Be that as it may, a cursory look at the naval defence industry reveals that interest in energy efficiency and green energy is there. “It is essential for navies to be constantly aware of any changes that could impact on their ability to procure and operate the equipment they require to complete their missions,” Timothy Hardy, Naval Engineering Business Lead at BMT told Armada International. “Such change can be regulatory, technical, political, and societal, for instance.”

In many ways, the push is coming from the commercial marine sector, itself under increasing public scrutiny and pressure. “The Greta [Thunberg] effect must not be underestimated,” added Mr Hardy.

For Naval Group, for instance, Mr Pommelet noted that issues such as fuel consumption, energy optimisation, and powerful batteries – all key to ship autonomy – are “absolutely critical, and we can benefit from what is happening in the maritime and the commercial domain.” Mr Pommelet gave little additional details on the Naviris R&D projects, but Naval Group’s website shows the company has already been working on such topics for some time.

In 2008, it initiated an eco-design approach with the objective of reducing “all environmental impacts of ships, from their design to their deconstruction, including operation, manufacture and maintenance.” More specifically, the approach seeks to control energy costs in relation to energy consumption and waste recovery, and increase autonomy of ships through hybrid propulsion systems. Eco-design is at the heart of Naval Group’s Blue Ship focus.

These are only two examples of initiatives seeking to optimise energy consumption on naval platforms and make them more environmentally sustainable; others exist or will follow. In fact, talking about factors driving Fast Patrol Boat designs, Paolo Tornese, lead project engineer, and Gianluca Tardivelli, head of Integration Department of the Naval Vessel Business Unit at Fincantieri, told Armada that environmental requirements of the country these ships are being built for and/or the countries they are likely to visit have become key. This is likely applicable to all naval platforms.

References about the 21st century being the ‘maritime century’ are now ubiquitous in official documents and research reports alike. This is bringing increasing pressure on governments to improve sustainability in the maritime domain, especially as public scrutiny of these issues grows and expands. As the commercial marine sector takes a deeper dive into greener technologies, it is likely that new builds in the naval defence sector will also need to “anticipate and build in margin for such options in the future,” as highlighted by Mr Hardy. The road ahead is long, but the ‘Green Defence Framework’ adopted by NATO in 2014, which seeks to facilitate Allies’ efforts in this domain, is a good sign that green may eventually become the new blue.