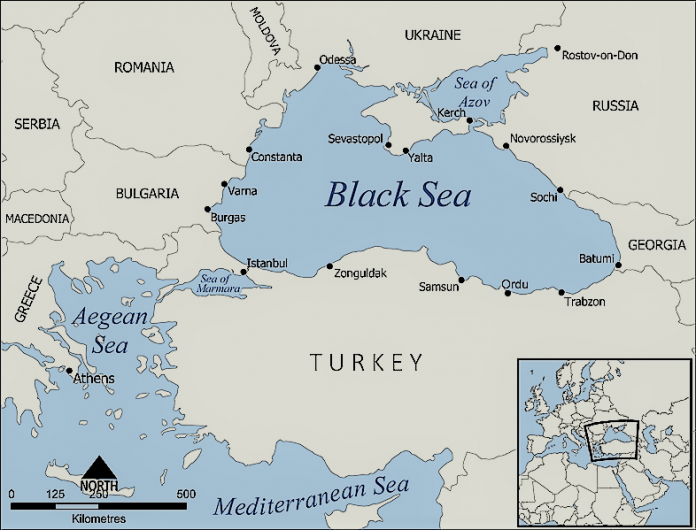 “This Officer has the wisdom of youth, and the energy of old age.” – Apocryphal Officer Fitness Report.

Russian forces began to pull back from the Ukrainian border region at the end of last week after the arrival of over 100,000 soldiers and a mass of equipment caused alarm within the Ukraine and those concerned about the stability of the region. Official Russian sources passed it off as just an exercise, but any such massive move of military matériel is designed to serve a political purpose not just a case of proving military logistical capability.

Russia’s illegal annexation of the Crimea in 2014 and its thinly veiled push into eastern Ukraine under the excuse of supporting separatists has ensured a constant tension with not only Ukraine, but also triggered worries that at some point it might try the same tactic in against the Baltic states of Lithuania, Latvia and Estonia.

In addition to this land border threat, Russia has reportedly issued a restriction to international military access into the Black Sea for six months up to October. Blocking Ukraine from trading through the Sea of Azov would be yet another tactic to bring pressure upon Ukraine.

At a NATO-Ukraine Commission meeting in Brussels on 13 April NATO Secretary General Jens Stoltenberg promised to “further enhance our cooperation with Ukraine and Georgia on Black Sea security.” Russia’s announcement seems to directly challenge that assertion. Russia, it seems, would like to make the Black Sea its own personal ‘lake’ in the same way that China is eyeing control of the South China Sea, although that ambition is likely to be restricted not least because of NATO member Turkey’s presence along the Black Sea’s southern rim. The loss of the Indonesian Navy Type 209/1300 submarine KRI Nanggala 402 with the loss of 53 personnel has been mourned by international naval forces across the world. The submarine went missing around 60 miles off the coast of Bali after reportedly requesting permission to dive during a torpedo firing drill. Wreckage found on 24 April and identified through the use of multi-beam sonar and magnetometer, as well as underwater imagery confirmed the location of the submarine on the sea bed.

While it is still too early to pinpoint the cause of the accident the Indonesian Navy (Tentara Nasional Indonesia-Angkatan Laut – TNI-AL) chief of staff Yudo Margono stated during a news conference that the submarine had been found in “at least three pieces at a depth of 838 metres (2,750ft), much deeper than its structure was rated to endure. He added that there had been no recorded problems associated with the submarine since it returned from its 2012 refit in South Korea.

While there was speculation about how much oxygen the crew might have had, the evidence so far seems to indicate a catastrophic break-up of the submarine as it exceeded its depth limit.

DARPA RESEARCH AIMS TO IMPROVE PPE FOR MILITARY AND CIVILIAN USE The PPB programme’s objective is to improve Personal Protective Equipment (PPE) for individual users facing chemical and biological (CB) threats, which naturally extends into the civilian world in terms of care staff working in vulnerable areas during a pandemic. Current equipment can be bulky and cumbersome, limited the user’s flexibility and slowing down their performance.

In terms of what it means to soldiers in the field facing such threats, Eric Van Gieson, PPB programme manager said the project is intended to “address PPE limitations, including threat-specific vulnerabilities, thermal/logistical burdens, and potential exposure risks…The capability to provide unburdened CB protection will be invaluable in maximising time on target, providing operational flexibility, extending mission duration, and enabling operations in austere environments, regardless of the threat.”

With the industry awards, DARPA is seeking the development of ‘lightweight materials and adaptable, tissue-protective countermeasures to provide on-demand, broad spectrum, and rapid long-term protection.’

“Successful PPB technologies have the potential to revolutionise how the military and public health communities perform in unpredictable threat environments, while also offering prophylactic and therapeutic solutions to known and emerging infectious diseases,” concluded Van Gieson.

US ARMY
Northrop Grumman Systems was awarded an $11million modification contract for integrating air defense systems in Poland. Fiscal 2020 Foreign Military Sales (Poland) funds in the amount of $11 million were obligated at the time of the award. U.S. Army Contracting Command is the contracting activity.

Leidos is awarded a $9 million contract for contractor support to operate and maintain the active and passive sonar systems necessary to provide mobile undersea acoustic surveillance capabilities. Foreign Military Sales funds in the amount of $994,036 will be obligated at the time of award. The Naval Information Warfare Systems Command is the contracting activity.

US ARMY
AITC-Five Domains JV was awarded a $27 million contract for to provide train, advise, assist and mentor services. Fiscal 2021 Foreign Military Sales (Saudi Arabia) funds in the amount of $27 million were obligated at the time of the award. U.S. Army Contracting Command is the contracting activity.

20 April
US AIR FORCE
Northrop Grumman Systems has been awarded a ceiling $2.3 billion contract with an ordering period of 18.5 years for sustaining engineering support and program management support services for the Intercontinental Ballistic Missile (ICBM) propulsion subsystem. This contract provides for assistance to the government in maintaining the Minuteman III weapon system. Work shall be in areas including, but not limited to; sustaining engineering, maintenance engineering, modification of systems and equipment, hardware and software maintenance, developmental and production engineering, procurement, replenishment, repair and refurbishment. The contractor shall be required to conduct materials and subcomponent analysis and test, including ageing surveillance test and evaluation. The primary focus shall be to identify ageing mechanism, anomalous behaviour, and ensure any modifications or changes to the system which shall maintain and/or improve system-level performance. Air Force Nuclear Weapons Center is the contracting activity.

Advanced Electronics, Riyadh, Kingdom of Saudi Arabia, has been awarded a $10 million modification contract to definitise the previously awarded letter contract for the F-15 Royal Saudi Air Force (RSAF) Electronic System Test Set (ESTS). Services acquired under this effort are to provide the RSAF with an upgraded ESTS. The RSAF currently uses an A31U18240-2 ESTS configuration, and this shall provide the scope to upgrade and install the A31U18240-3 and A31U18240-4 configuration (frequently referred to as -3 and -4, respectively), as well as familiarisation training, regression testing, and travel. Foreign Military Sales funds in the amount of $6 million are being obligated at the time of award. Air Force Life Cycle Management Center is the contracting activity.