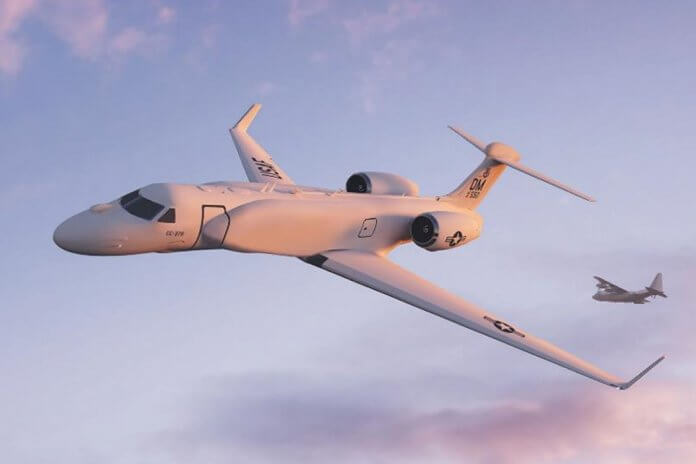 Transitioning the capabilities of the USAF’s Compass Call jamming aircraft to a new plane gather pace.

The US Air Force overhaul of its tactical and operational Communications Jamming (COMJAM) capabilities has taken a step forward. BAE Systems confirmed in early April that flight tests of its Small Adaptive Bank of Electronic Resources (SABER) capability had been performed. The flights were completed using an air force Lockheed Martin EC-130H Compass Call COMJAM aircraft. Eleven flights were made from Davis Monthan airbase, Arizona.

Although trialled onboard an EC-130H, SABER is destined to equip the air force’s forthcoming Gulfstream EC-37B Compass Call COMJAM planes. Reports say that ten EC-37Bs will be acquired. The first should enter service in 2023.

The air force has taken a novel approach to the EC-37B’s capabilities. It is not developing new Communications Intelligence (COMINT) and COMJAM apparatus for the EC-37B. Instead, existing COMINT and COMJAM systems from the EC-130H will ‘cross deck’ onto the EC-37B.

The aircraft is also outfitted with the Tactical Radio Acquisition and Countermeasure Subsystem (TRACS-C). SPEAR is though to be used against civilian communications, with TRACS-S employed against military V/UHF networks. Finally, the aircraft’s NOVA equipment jams remote-controlled improvised explosive devices.

SABER adds a software defined architecture to the EC-130H that will also transition to the EC-37B. At the heart of SABER is an ensemble of software defined radios. These use open architecture. This may allow the easy introduction of new COMJAM waveforms and techniques as and when needed. These can then be transmitted through SPEAR, TRACS-C and NOVA. This will help the EC-130H and EC-37B stay abreast of emerging civilian and military communications protocols as they proliferate.

Pam Potter, BAE Systems’ director of electronic attack solutions, told Armada that the latest test flights demonstrated and verified the ability of the radios to host third party software. Although not divulged by the firm this could include the COMJAM waveforms and techniques discussed above. Ms. Potter continued that SABER is “being evaluated for fielding on the EC-130H … with upgraded versions of the capability planned for EC-37B.” SABER ground and flight will continue for the rest of this year.

The USAF and its sister services face distinct COMINT/COMJAM challenges. So-called fifth-generation wireless communications protocols in V/UHF wavebands and beyond are proliferating. These herald a step change in the number of subscribers and quantities of data handled by individual wireless networks. Meanwhile, the military world is showing interest in avantgarde communications techniques like Millimetric Wave (MMW) radio. MMW radio transmits in frequencies of 30GHz and above. This could provide wideband, discrete, point-to-point communications for land forces. The EC-130H and its EC-37B successor will be busy.