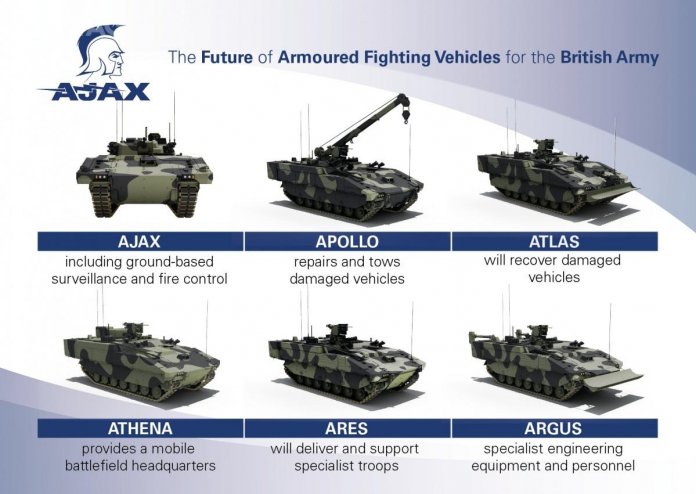 Heavy criticism has been directed towards the British Army’s proposed new family of Ajax armoured fighting vehicles (AFVs) which have been promised to deliver “transformational change” to the Army’s armoured fleet.

“Serious issues” have brought a halt to ongoing trials. These reportedly number “excessive noise and vibration,” with crews having been limited to only 90 minutes in the vehicle during testing, and the turreted version not being able to fire accurately when on the move.

The Ministry of Defence (MoD) has ordered 589 vehicles from manufacturer General Dynamics Land Systems UK although only 14 deliveries of the Ares variant (unturreted) have so far taken place. The Ajax family comprises five variants – Ares, Athena, Atlas, Apollo and Argus – which will be dedicated to a variety of missions from troop transport to recovery and command and control.

Speaking at the Royal United Services Institute’s Land Warfare Conference 2021 on 2 June, Defence Procurement Minister Jeremy Quin stated that the technology within Ajax would allow it to “hoover up data from the ground, air and cyber space, it can build a four-dimensional picture of the battlespace and help coordinate our response with the wider force.”

During a debate at the House of Commons on 8 June, Quin reported that the contractor had not reported the same level of noise or vibration problems during its own testing, although he “absolutely trust(ed) the reports that have come to me from our service personnel.”

Over £3.2 billion has been spent by the MoD on the programme to date out of a maximum allocated of £5.5 billion but the delivery programme is four years behind schedule.