On 6 and 7 July 2021, Arquus organised the third edition of the Technoday, a conference dedicated to innovation in the field of land defence. On this occasion, the company presented the results of the work carried out over the last two years in future-oriented areas ranging from power generation in operations to innovative support and maintenance solutions.

The Technoday 2021 have been an opportunity to present, in very concrete terms, the progress of work in several fields, and to look ahead to the land mobility programmes of tomorrow. These two days were also an opportunity to exchange ideas, to compare points of view, to answer questions and to guide the work of Arquus engineers.

On the occasion of this second edition of Technoday, Arquus has welcomed many military and civilian personalities, who have come to discuss the evolution of land combat and the answers to the challenges facing the Army. This year, Arquus has chosen to focus on six major themes: energy transition, robotisation, digitalisation, survivability, support, but also on innovations in the industrial field through a workshop dedicated to the innovative factory. Innovation is everyone’s business, every day. This is why Arquus has also presented its everyday innovations, developed in its factories or in the field close to the forces.

The whole event was completed by a conference led on Tuesday 6th by Philippe Divry, SVP Group Trucks Strategy of the Volvo Group, and on Wednesday 7th by General Bertrand Boyard, Special Advisor to the President Emmanuel Levacher, in charge of European Affairs.

For the very first time, Arquus has opened its doors to partner companies, with whom the company works hand in hand to ensure the improvement of its solutions and the development of breakthrough innovations. Arquus is pleased to welcome Cerbair, Internest, Robotics Industrie, Prévision IO, Squadrone and Air Captif, as well as the VEDECOM Institute.

To build its innovation, Arquus also works with leading engineering schools such as ENSTA Bretagne. These partnerships are intended by Arquus to create new perspectives on the future of land defence applications and meet the growing demand from students who want to broaden their skills by training in the technologies and major challenges of land systems engineering in highly technical fields. In this context, Arquus created in 2018 a teaching chair dedicated to defence innovation at ENSTA ParisTech.

Arquus also presented electric equipment on loan from Volvo Construction Equipment: an electric compact excavator, a wheel loader and a fast loader. The company is also exhibiting a 100% electric D ZE truck on loan from Renault Trucks. This new generation industrial vehicle has a GVW of 16 tonnes and a maximum range of 400km.

These vehicles illustrate the technological and industrial strength of the Volvo Group, from which Arquus benefits beyond its own research and expertise centres, but also the very practical nature of the solutions Arquus offers for military applications. Based on civilian technologies that have already been proven under very difficult conditions, they are particularly well suited to the very specific uses of the battlefield.

Hybrid-engine powerpack for medium armored vehicles, which should serve as a base for the hybrid-drive Griffon vehicle project A synthesis of all the company’s historical know-how in vehicle design, robust and relevant technology development and systems integration, the Scarabee is at the heart of Arquus’ presentations during these Technoday. It embeds the company’s latest advances in survivability, digitalisation, robotisation and energy.

In addition to these technological building blocks, the Scarabee is presented at Technoday as a platform designed to accommodate numerous plug-and-play systems, thanks to Arquus’ Battlenet vetronics suite. This Battle Management System (BMS) aggregates the various data from the vehicle’s different systems, sensors and effectors, presenting all the information on the vehicle’s status and tactical situation on a single screen and lightening the mental load of the commander.

As part of Technoday, the Scarabee is equipped with a remotely operated turret combining optronics, an effector and a self-protection solution thanks to an independent smoke-launching crown, as well as an aerial drone that can be piloted from Battlenet, which reminds us of the importance of the problem of autonomous or semi-autonomous objects and the relevance of their association with land vehicles. Arquus is also continuing to work on the Mission Extender, a robotic module designed to accompany the Scarabee and increase its tactical capabilities.

Finally, in the context of anti-drone warfare, Arquus is considering the development of new capabilities by integrating detection, jamming and specific effector functions. 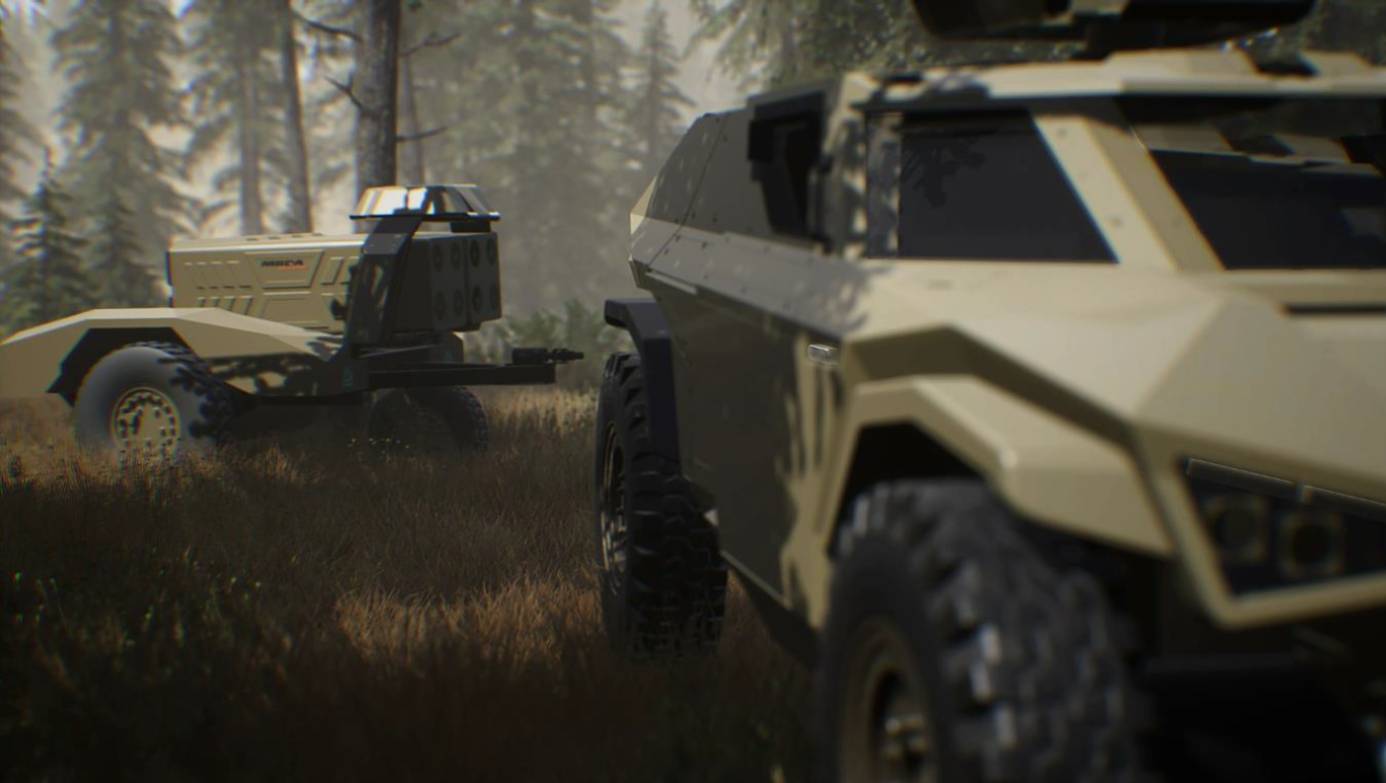 Launched commercially at IDEX 2021 exhibition in Abu Dhabi, the Scarabee is a mature vehicle, ready for industrialisation, but also a technology demonstrator, some of whose building blocks could be used in the design of future armoured, light or medium vehicles. In this respect, Arquus is part of the FAMOUS (European Future Highly Mobile Augmented Armoured Systems) group, which was set up to strengthen links between European partners and optimise synergies, standardisation and interoperability in the field of land armoured vehicles.

Arquus once again reaffirms its philosophy of innovation. Refusing innovation for innovation’s sake, the company works, often with its own funds, but also through PEAs, on research topics with very concrete applications for the military, and which aim to simplify the use and logistics of equipment, while saving the physical and mental potential of our soldiers and reducing energy expenditure and the cost of vehicles.

Arquus also innovates by improving existing equipment, by working on mechanics, tools, ergonomics and daily management, with the aim of facilitating the work of tomorrow’s operators and maintainers. For Arquus, innovation means constantly questioning itself and looking for simpler, more economical solutions. In the future challenges of tomorrow, Arquus wants to be more than ever at the side of the forces, by identifying with and for them the opportunities of gains on the ground and by feeding off their feedback.