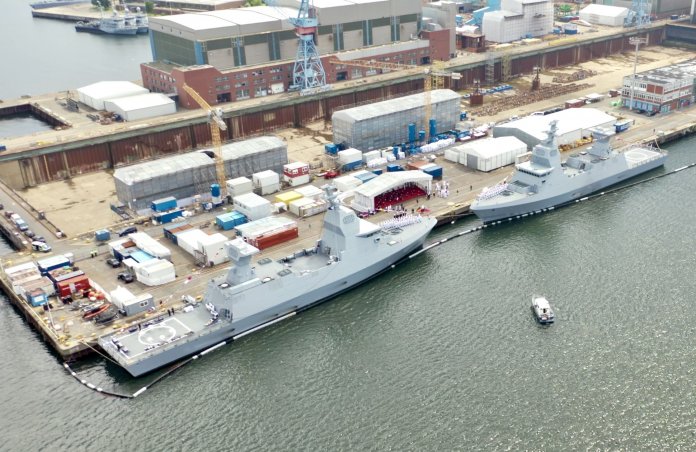 The Israeli Navy has taken delivery of the second pair of SA’AR 6-class corvettes from Thyssenkrupp Marine Systems, working in a joint venture with German Naval Yards Kiel, Germany.

The latest two SA’AR corvettes, INS Atzmaut and INS Nitzachon, follow after the first vessel completed in November 2020, INS Magen, followed by the INS Oz in May 2021.

The SA’AR 6 corvettes are 90 metres long, have a beam of 13m and displace around 1,900 tonnes. The ships have a maximum range of 4,000 nautical miles. The Israeli Navy plans to operate all four of the SA’AE 6-class for at least the next 30 years. Israeli Navy Commander-in-Chief Vice Admiral Eliyahu Sharvit attended the handover ceremony.

Armament for each vessel can include an Oto Melara 76mm main gun, two Typhoon Weapon Stations, 32 vertical launch cells for Barak-8 surface-to-air missiles, 20 cells for the C-Dome point defence system, up to 16 anti-ship missiles, the EL/M-2248 MF-STAR AESA radar, and two (12.8in (324mm) torpedo launchers. It has hangar space and a platform able to accommodate a medium helicopter between 6-7 tonnes.

The contract for to build and deliver four corvettes, which was signed in May 2015, has now been completed. Fitting out with radars and weapons systems will be conducted by the Israeli Navy in Israel.