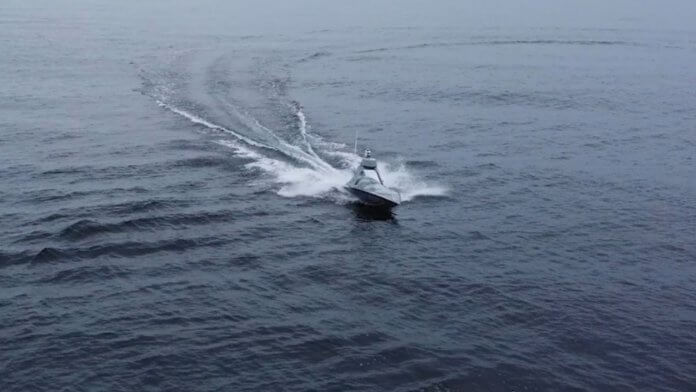 Sea trials to demonstrate how the integration of new technologies in unmanned systems were concluded at the end of August in the Hanö Bay, Sweden.

As part of OCEAN2020, a $42 million (€35.48 million) research project under the European Union’s Preparatory Action on Defence Research, this was the second Baltic Sea demonstration held over two days. It aimed to show ‘how the information collected from the assets deployed in the area of operations can be integrated to create a Recognised Maritime Picture (RMP).’

A total of 12 unmanned systems, four naval vessels, five tactical command and control systems, one earth observation satellite system were coordinated through a prototype EU Maritime Operations Centre (EU MOC), installed at the EDA. These comprised: three systems from Saab, two each from IOSB and TNO, and one from Leonardo, Safran, Bluebear, CMRE and GMV.

The four naval units represented were the Swedish Navy’s HMS Pelikanen; the Lithuanian Navy’s P11 Žemaitis; the German MOD R/V Planet (WTD 71) and Polish Navy Minehunter Czajka of Krogulec. The satellite systems involved in the trial were COSMO SkyMed. The EU’s Finally, the EU MOC was coordinated by Indra & IOSB including connectivity with the Spanish MOC through MARSUR network.

The second was focused on an unknown submerged threat, which tested the detection and identification of underwater threats (e.g., sea mines or IED), laid from hostile submarines and to detect the insertion of hostile Special Forces on a friendly coast.

OCEAN2020 was launched in April 2018 and work has focused on the areas of solution analysis, system design, technical development and system integration. The first demonstration was staged in the Gulf of Taranto near Italy in 2019.

Thank you for the MEWSIC!