By signing the third implementing agreement for the Next Generation Weapon System (NGWS) within a Future Combat Air System (FCAS) in August 2021, France, Germany and Spain have set the political framework for the project until 2027. The program is intended to provide a wide range of new capabilities while putting industrial players in the three partner nations at the technological forefront of the defense sector. As one of them, German mechatronics manufacturer VINCORION is preparing for the challenges that represent nothing less than a quantum leap for Europe’s defense capabilities.

FCAS challenges the European defense industry to develop a 6th generation fighter without previously having gained experience and know-how through the development of a 5th generation fighter. Additionally, the aim is to secure key technologies in Europe such as communications, crypto & network-enabled operations, artificial intelligence, sensors, stealth, and electronic warfare. This expertise needs to be developed quickly and simultaneously, which poses enormous challenges for the European defense industries. The expectations for FCAS are correspondingly high.

“We are aware of these challenges and are ready to make our contribution to FCAS,” says Stefan Stenzel, Managing Director of VINCORION. Since 2018, VINCORION has been the brand of Jenoptik Advanced Systems and represents the mechatronics division of the German technology group Jenoptik. With production facilities in Wedel, Essen, and Altenstadt, the company looks back on more than six decades of worldwide business experience and expertise in engineering, manufacturing and support for electromechanical applications as well as electronics within the aerospace industry, safety and defense and transport sector, including rail, vehicles and airports.

During the last decades, the German mechatronics manufacturer has built a reputation as a long-standing partner to the European defense industry and has had a hand in all the major aircraft launched in recent decades. As such, VINCORION implemented tailored solutions in aircraft ranging from the F-104 as an early generation fighter to the Eurofighter as a 4+ generation fighter and is supporting these platforms across their entire lifecycle to maximize operational readiness.

A High-Voltage DC System for FCAS

“We believe that establishing a high-voltage DC electrical system architecture and integrating high-power equipment will become a key challenge for FCAS in the context of electrical power generation, conversion, distribution, and management,” said Stenzel. VINCORION benefits from having already developed safe high-voltage DC electrical power systems with both primary-stabilized DC buses and conventional buses. These systems have already been integrated into several of the latest military vehicles.

“Based on our experience and existing products, our capabilities can help facilitate a low-risk approach in areas such as electrical power generation, power conversion, power management and distribution, electrical ground power support, actuators, electrical deicing systems, radomes and next level services.” said Stenzel, as illustrated below. 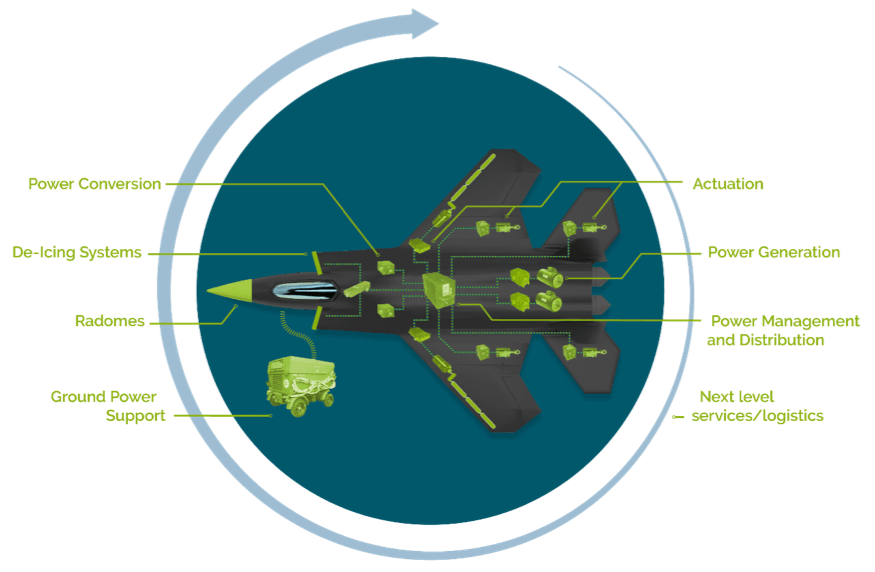 Key factors that will determine whether the implementation of FCAS is successful, however, are not in the hands of companies, but rather at the political level. “We are delighted with the positive results of the project over the past few months and are pleased to have been involved in FCAS from early on,” said Stenzel.