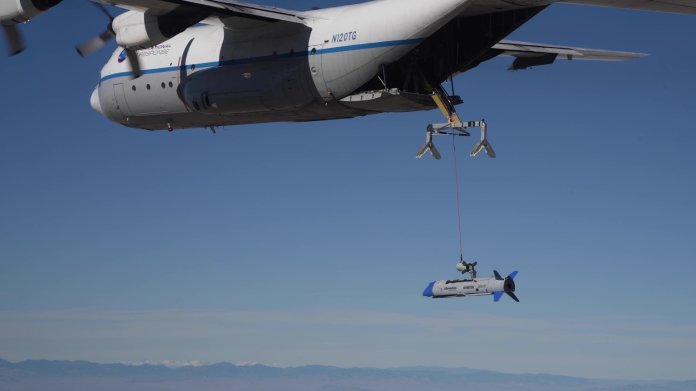 The Defense Advanced Research Projects Agency (DARPA), working with Dynetics, has successfully demonstrated the airborne recovery of an unmanned aerial vehicle (UAV) as part of its Gremlins programme.

In October, over the Dugway Proving Ground, Utah, a Lockheed Martin C-130 Hercules successfully recovered an X-61 Gremlin Air Vehicle while in flight. Two Dynetics X-61 Gremlins had been conducting autonomous formation flying, although one was later destroyed during further flight tests.

“This recovery was the culmination of years of hard work and demonstrates the feasibility of safe, reliable airborne recovery,” said Lt. Col. Paul Calhoun, programme manager for Gremlins in DARPA’s Tactical Technology Office.

“Such a capability will likely prove to be critical for future distributed air operations.”

The Dynetics X-61A Gremlins Air Vehicle (GAV) flew for the first time in November 2019. Since then, the GAV and the recovery system have conducted a three trials to demonstrate the safety of the GAV in automated flight as well as working towards flying in formation with the C-130 as a prelude to the aerial docking attempt.

The test team have logged hours of data collected during four flights which includes ‘air vehicle performance, aerodynamic interactions between the recovery bullet and GAV, and contact dynamics for airborne retrieval.’

“Airborne recovery is complex,” stated Calhoun. “We will take some time to enjoy the success of this deployment, then get back to work further analysing the data and determining next steps for the Gremlins technology.”

Once the safe recovery of GAVs has been fully trialled and confirmed, it is expected that this will lead to UAVs being able to fly greater distances and remain on station longer during specific missions. Air launched and subsequently recovered UAVs can also be refurbished quickly by ground crews at a safe distance from a threat and quickly put back into operational use.