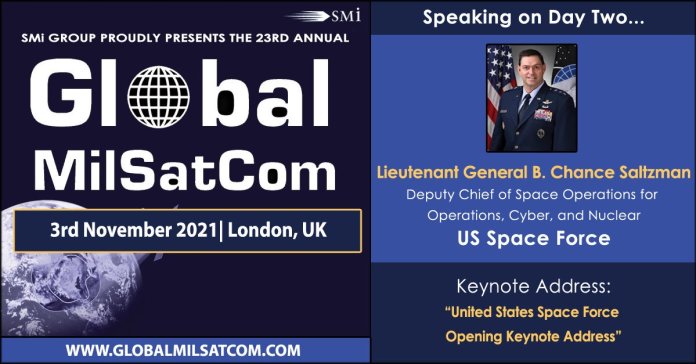 A new space race is upon us. Not one to go to another planet, but one closer to our own. It is the race for space security.

A number of themes ran through SMI’s Global MilSatCom 2021 conference in London last week included warnings that both China and Russia were developing and testing methods to disrupt competitive space satellites and capabilities, and that the days of the government and the military having primacy in space (at least from the viewpoint of democratic nations) had been replaced with the need to collaborate with, and use, the civil space sector.

The seriousness of today’s challenge was starkly outlined by Lieutenant General Chance Saltzman, deputy chief of Space Operations, US Space Force when he stated: “We have invested in exquisite but defenceless [space] systems for decades.” Faced by anti-satellite tests, advanced satcom jammers and ways to disrupt kill chains, Lt Gen Saltzman stated that the democratic nations needed to focus on building systems and satellites that could survive when threatened in space. “Hybrid architecture is the future,” he said, referring to the benefits that would result from partnering with civil developers and service providers.

There was also a realisation that the strategic thinking behind the management and development of space defence needed greater development, and many speakers referred to the need to work with ‘allies and partners’ to make this happen.

In terms of international cooperation, he said that it would be important to duplication reduce the duplication of effort among allies and partners. AVM Godfrey stated that it was important to “develop complimenting capabilities, although there will be competing areas” due to each nation’s own t sovereign capability requirements.”

Just how reliant the military has been on the civil sector was revealed by Wing Commander Andrew Eccleston, SO1 Space and Bearers, UK Strategic Command when he noted that “80 percent of bandwidth during the Iraq campaign was [delivered] through commercial services.” 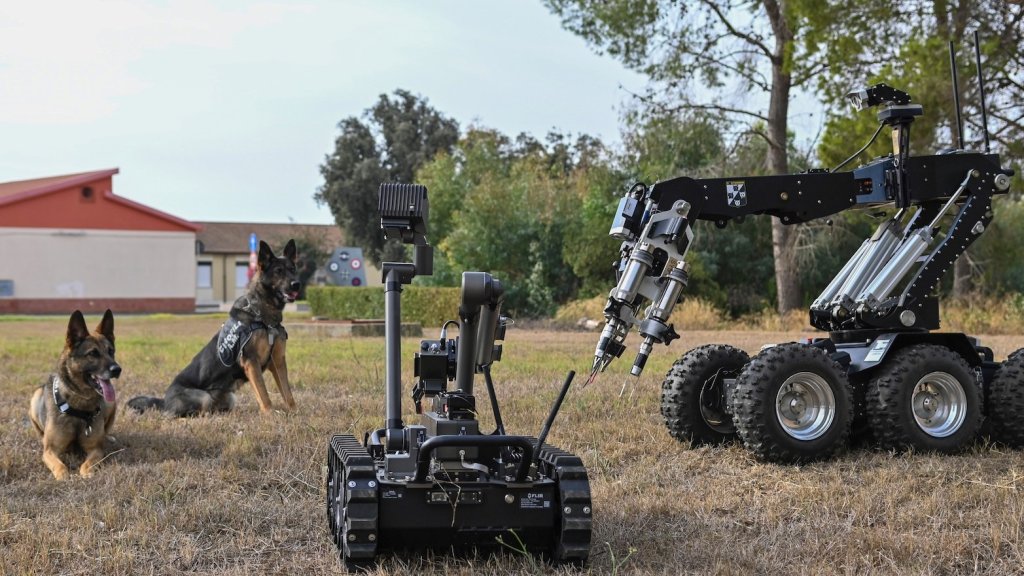 Around 650 counter-IED teams from 10 EU member states – Austria, Belgium, the Czech Republic, France, Germany, Hungary, Italy, Slovenia, Spain, and Sweden – together with representatives from Norway and the United States took part in the three week exercise.

The exercise scenario revolved around a multinational operation such as those conducted by NATO, the EU and the United Nations. It encompassed a wide range of C-IED challenges which required participants to engage in “planning in joint task force headquarters , military search, route clearance and weapons intelligence, to combat engineering” according to an EDA statement. Tasks included: Explosive Ordnance Disposal/Improvised Explosive Device Disposal (EOD/IEDD), manual neutralisation techniques and technical exploitation.

Exercise Bison Counter allowed several of the EDA’s own projects to be brought together including the Joint Deployable Exploitation and Analysis Laboratory (JDEAL), the European Centre for Manual Neutralisation Capabilities (ECMAN) and the Military Search Capability Building (MSCB).

The EDA will launch a new project (Cat B) in early 2022 involving 13 member states that will see the formation of a permanent expert team to plan subsequent Bison Encounter exercises scheduled for 2023, 2025 and 2027. Previous C-IED exercises were staged in the Netherlands (2013) and Sweden (2016).

BATTLE OF ‘THE MARINES’ AT TWENTYNINE PALMS A VICTORY FOR TACTICS

It has been widely reported in the UK that the United Kingdom’s Royal Marines 40 Commando ‘dominated’ a US Marine Corps force during a training exercise at at Marine Corps Air Ground Combat Center, Twentynine Palms in California.

Two US Marine formations and their UK counterpart Royal Marines were also exercising alongside soldiers from the Netherlands, Canada and the United Arab Emirates. Exercise Green Dagger concluded with an “intensive five-day battle” between 24-30 October.

A more accurate picture is that 40 Commander were actually operating with an infantry battalion from the 7th Marine Regiment, a Netherlands Army raiding squadron, a company from the UAE’s Presidential Guard, a company from United States Marine Forces Special Operations Command (MARSOC) together with artillery and air support. They faced two mechanised infantry battalions from the 3rd Marine Regiment backed by their own artillery and air support.

A useful overview of the exercise was provided by Dr Jack Watling, Land Warfare Research Fellow at the Royal United Services Institute (RUSI), who was present during the concluding battle.

Factors that Dr Watling reported included an inflexibility of the 3rd Marines: “3rd Marines were also cognitively dependent upon technical reconnaissance and would not move without ISR in the air. This slowed their tempo of operations. The demand for a high-fidelity operating picture in 3rd Marines’ headquarters before acting also meant that by the time they acted the situation on the ground had changed, leading to a failure to manoeuvre at the speed of relevance. ISR was a dependency rather than acting as a force multiplier.”

Although 3rd Marines were allowed to regenerate on day three, mistakes that had been made before were repeated and initiatives were again squandered.

There was no doubt that the Royal Marines Future Commando Force (FCF) performed very effectively in what they did. However, Dr Watling stated that 40 Commando “were never on 3rd Marines’ main line of effort and was not the primary target of 3rd Marines’ ISR, fires or manoeuvre elements.” The role of the 7th Marines and other allied forces played a decisive distraction that contributed to the success of 40 Commando.

Shortfalls on the RM side included inadequate night vision capability, a requirement for heavy 155mm USMC artillery support to engage targets out of range of the RM’s 105mm howitzers, and a lack of light utility vehicles to allow small unit battlefield mobility.

8 October – Australia, EA-18G Growler Aircraft and Related Defence Services
The State Department has approved a possible Foreign Military Sale to the Government of Australia of MH-60R Multi-Mission Helicopters, Related Defense Services, and related equipment for an estimated cost of $985 million.

5 November
US AIR FORCE
Lockheed Martin has been awarded a $10.8 billion IDIQ contract for Advanced Raptor Enhancement & Sustainment (ARES) for the F-22 Program Office. This contract vehicle provides support for the necessary supplies and services to sustain and modernise the F-22 Raptor, including modernisation hardware kit procurement and services such as upgrades, enhancements and fixes, as well as performance-based logistics services. Air Force Life Cycle Management Center is the contracting activity.

US NAVY
Lockheed Martin Sippican is awarded a $105 million modification contract to exercise options for the production of MK 48 Mod 7 guidance and control sections and MK 48 Mod 7 Common Broadband Advanced Sonar System kits. This modification is in support of the MK54 MOD 7 heavyweight torpedo program. The Naval Sea Systems Command is the contracting activity.

US AIR FORCE
Space Dynamics Laboratory; and Republic of Korea, have been awarded a $28.9 million contract for the support and sustainment of the tasking, collection, processing, exploitation and dissemination of data for the Republic of Korea Global Hawk. This contract involves 100 percent Foreign Military Sales (FMS) to the Republic of Korea. Warner Robins Air Force Base is the contracting activity.

29 October
US AIR FORCE
General Electric has been awarded a $1.5 billion contract including all options for the F-15EX Lots 2+ propulsion system procurement. This contract provides for 29 F110-GE-129 engines (installs and spares) for the F-15EX fleet. The contract also provides seven option lots for a most probable quantity of 329 total engines if all options are exercised. Air Force Life Cycle Management Center is the contracting activity.

Northrop Grumman Systems has been awarded a $108 million bilateral modification contract for RQ-4 Global Hawk aircraft sustainment. The modification provides for a second year of contractor logistics support services. Foreign military sale funds in the amount of $22 million are being obligated at the time of award. Air Force Life Cycle Management Center is the contracting activity.

L-3 Communication Integrated Systems has been awarded a $51.9 million contract for the procurement of contractor management services, advanced engineering services and Group B long lead procurement. This award is the result of a sole-source acquisition and involves 100 percent Foreign Military Sales. The 645th Aeronautical Systems Group is the contracting activity.

US ARMY
Lockheed Martin Rotary and Mission Systems was awarded a $22.2 million contract for the production and delivery of modernised-radar frequency interferometer hardware components in support of Foreign Military Sales partners India Army, Morocco and Netherlands. US Army Contracting Command is the contracting activity.

28 October
US AIR FORCE
Northrop Grumman Aerospace Systems has been awarded a $298 million IDIQ contract modification for the RQ-4B Global Hawk. The contract provides for repair services for “common items” for both the RQ-4B and MQ-4C Triton. It will support reparable National Stock Numbers (NSNs) which encompass the Air Vehicle, multiple sensor packages, Mission Control Element, and Launch and Recovery Element. In addition, this effort includes support engineering services covered under the engineering delegation authority for NSNs transferred to and under the management of the 407 Supply Chain Management Squadron. Air Force Sustainment Center is the contracting activity.

US ARMY
Lockheed Martin Missiles and Fire Control was awarded a $243 million contract for long range fires technology development and demonstration. US Army Contracting Command is the contracting activity.